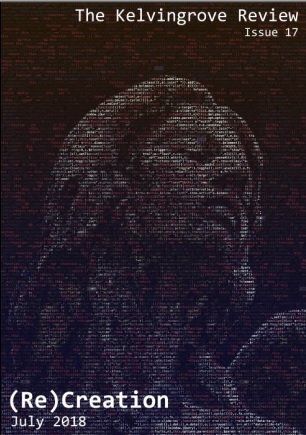 The seventeenth issue of The Kelvingrove Review decided to break the mould. Following our theme of (Re)Creation, we proposed reviews of work that, by nature of their inclusion in this issue, interrogate and, we hope, redefine traditional academic review journal conventions. As an Arts and Humanities journal, we wanted our reviews to reflect the vast fields of research and work in our area of study. This issue includes reviews of television programmes, films, fiction novels, and scholarly texts. Ranging from political upheaval, to alien invasion, to human memory, this collection of reviews presents you with ideas and questions that we hope encourage your own paths of re(creation).

The journal can be downloaded in PDF format below.

Somebody I Used to Know  Wendy Mitchell with Anna Wharton

The Amateur: The Pleasures of Doing What You Love Andy Merrifield

Arthur and Sherlock: Conan Doyle and the Creation of Holmes Michael Sims

Utopia for Realists: And How We Can Get There Rutger Bregman

No Is Not Enough: Defeating the New Shock Politics Naomi Klein