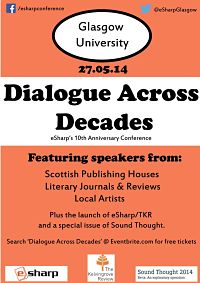 Welcome to the thirteenth issue of The Kelvingrove Review. Its launch coincides with the publication of the twenty-second issue of eSharp,University of Glasgow’s interdisciplinary postgraduate journal. Marking the 10th anniversary of eSharp, the theme shared by both journals is ‘Dialogue across Decades’. As its younger sister publication, now entering its seventh year, The Kelvingrove Review embraces this theme by bringing together reviews of books characterised by the two-faced nature of historical thought  – one looking at the past and taking stock, the other facing the future and offering new approaches. While historical perspectives dominate, we as editors have attempted to create an issue that is interdisciplinary nonetheless. Hence, the 11 books under review derive from a variety of academic fields including: film studies, political sciences, law, cultural and heritage studies, media history, sociology, performance studies and publishing. The first three texts Heritage Studies: Stories in the Making, Ancient Greek Women in Film and Recovering 9/11 in New York consider different practices of reconstructing the past in the context of its use for the present. Performing Archives/Archives of Performance tackles questions about the archive as well as the practice of archiving itself, which is especially significant in an academic field that explores momentary acts rather than tangible objects. Reconsiderations of existing historical narratives as well as new interpretations are offered in International Relations and the First Great Debate, Student Power! The Radical days of the English Universities, Cinematicity in Media History, and British Queer History: New Approaches and Perspectives. Finally, Merchants of Culture concludes the themed part of this issue by exploring the challenges the publishing business is confronted with in the twenty-first century.  Like its predecessors, the present issue also features two non-themed contributions, a review of Intangible Cultural Heritage in International Law and an analysis of Mixed Race Identities: Identity Studies in the Social Sciences.

The editors of The Kelvingrove Review offer their thanks to all contributors to this issue, who have responded to our call with enthusiasm and displayed an ability to evaluate academic texts from a variety of disciplines fairly and critically.  It is now over to you, the readers, who we wish a pleasurable and thoughtful journey headfirst into the past and future.

Heritage Studies: Stories in the Making

Student Power! The Radical Days of the English Universities

Merchants of Culture: The Publishing Business in the Twenty-First Century

Written by John B. Thompson