Research title: Data protection in the context of online personalised pricing in the EU and China: A comparative analysis

Zihao Li is a current PhD candidate at School of Law. He obtained his double Bachelor’s degrees in Computer Science (BSc) and Law (LLB) in 2017, both from Chongqing University of Posts and Telecommunications, China. During 2015, he studied as an exchange student in University of California, Irvine. He also holds LL.M. in Intellectual Property and Digital Economy from University of Glasgow.

His research interests include information technology law, Internet law and cybersecurity with particular focus on data protection law. Zihao is also a member of the CREATe Centre and the Editorial Board Chair of IP society in University of Glasgow. Based on his interdisciplinary background, Zihao’s research aims to explore what is the best way for China to protect data in the increasingly widespread application of big data era.

In terms of internships, Zihao has had several internships in the Chinese People’s Intermediate Court, both in Criminal Court and Civil Court to assist judge to draft the verdict of several cases. He also had an internship in the Chinese Administration for Industrial and Commercial, assisting in the dealing with online intellectual property infringement. 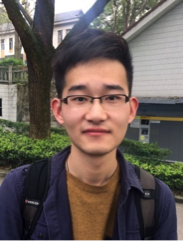