The Collections have been inscribed following an independent process by the UK Memory of the World Committee, supported by the Department for Digital, Culture, Media and Sport.

One of the three collections recognised is The Crutchley Archive held at Southwark Archives whose significant and importance has been documented by a research team led by University of Glasgow’s Dr Anita Quye.

Dr Quye said: “The Crutchley Archive is a rare chance to understand textile dyeing and dyers’ practice in London in the early 1700s. Red splashes and tinted pages in the calculation books from Crutchley dye houses, hundreds of detailed instructions to dye wool with cochineal, madder and ‘tin spirits’ in ‘ye great kettle’ using ‘water from the River Thams’, and thousands of dyed fabric samples of the end results – it’s the closest we can get to looking over the dyers’ shoulders as they work.

“If we hadn’t researched the Crutchley Archive in depth it would still be a colourful curiosity in a box in Southwark Archive’s collection store.” 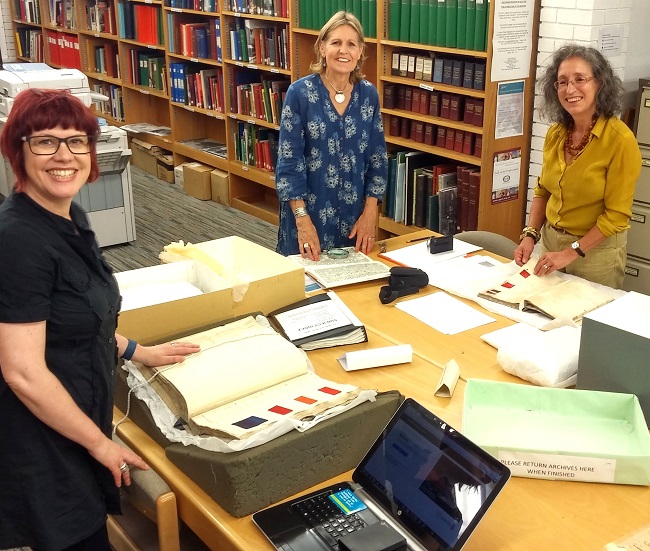 The announcement of the three archives will join other wealth of national material arleady on the prestigious UK register was made on International Archives Day, 9 June 2020.

The ‘inscription’ onto the UK Memory of the World Register of these significant examples highlights the critical importance of their survival and accessibility of UNESCO’s commitment to their preservation. They are:

The Crutchley archive provides a unique, important and detailed record of a once ubiquitous industry which has all but vanished from the UK. The provision of measured recipes for dyes and the survival and preservation of quality samples, makes this collection very significant in understanding a prominent 18th century UK industry, both at home and internationally.

The James Watt Papers and specifically his work on the separate condenser nominated here contain a unique insight into the inspiration and development one of the most important scientific and technological advancements of the industrial revolution, a turning point in UK and world history.

IK Brunel’s Screw Propeller Report marks an immensely important turning point in UK and world history. While Brunel did not invent the screw propeller, his experiments and the production of this meticulously evidenced document enabled its adoption and were pivotal in creating the modern world economy through trade.

Ambassador Matthew Lodge, UK Ambassador and Permanent Delegate to UNESCO, said: “On behalf of the UK Permanent Delegation to UNESCO, I am delighted that these rich and varied examples of the United Kingdom’s documentary heritage will be inscribed onto UNESCO’s Memory of the World Register.

“In UNESCO’s 75th anniversary year, and for the UK as a proud founding member of the organisation, the inscription of these documents marks a further positive step in our international efforts to preserve and share material that tells the story of modern humanity’s journey.

“From the records of the textile dye houses in the 18th century, to James Watt and IK Brunel’s inventions that shaped Britain and the modern world, these documents remind us all of our nation’s history and our shared heritage. We look forward to continuing to support UNESCO’s work and this valuable programme over the coming years.”

In 1993, a United Nations advisory committee met to produce an action plan to preserve significant documentary heritage from across the globe by cataloguing and protecting historical archives for future generations to learn from and enjoy. The result was the UNESCO Memory of the World Programme, the documentary heritage equivalent of UNESCO World Heritage Sites.

The collection includes historical documents such as the Bill of Rights, the HIV/Aids collections from Lothian Health Services Archive, The Children Society and the Peterloo Massacre Relief Fund. Alongside some of our more well-known archives in the UK, the programme also has a responsibility to champion lesser-known but uniquely important collections and make them understood in terms of national significance. The aim is to represent UK society as broadly as possible through cultural heritage.

About the UNESCO UK Memory of the World Programme

The first inscriptions to the UK Memory of the World Register were announced in July 2010 to highlight documentary heritage, which holds cultural significance specific to the UK. The UK Register helps raise awareness of some of the UK’s exceptional, but lesser-known documentary riches by awarding them with the globally-recognised Memory of the World status, but within a UK context and is separate to the International Register.

About the UNESCO Memory of the World Programme

United Nations Educational Scientific and Cultural Organisation (UNESCO) is the ‘intellectual’ agency of the United Nations and was established in 1945.

The UNESCO Memory of the World Programme aims to facilitate preservation of the world's documentary heritage, to assist universal access and to increase awareness worldwide of the existence and significance of this documentary heritage through both an international Register and individual country Registers. This globally-recognised status celebrates some of the UK’s most exceptional archive riches.

The International Memory of the World Register recognises documentary heritage of global significance and includes UK-based documents such as Magna Carta. The UK Memory of the World Register honours documentary heritage of national and regional significance and includes documents suchas the Death Warrant of King Charles I.