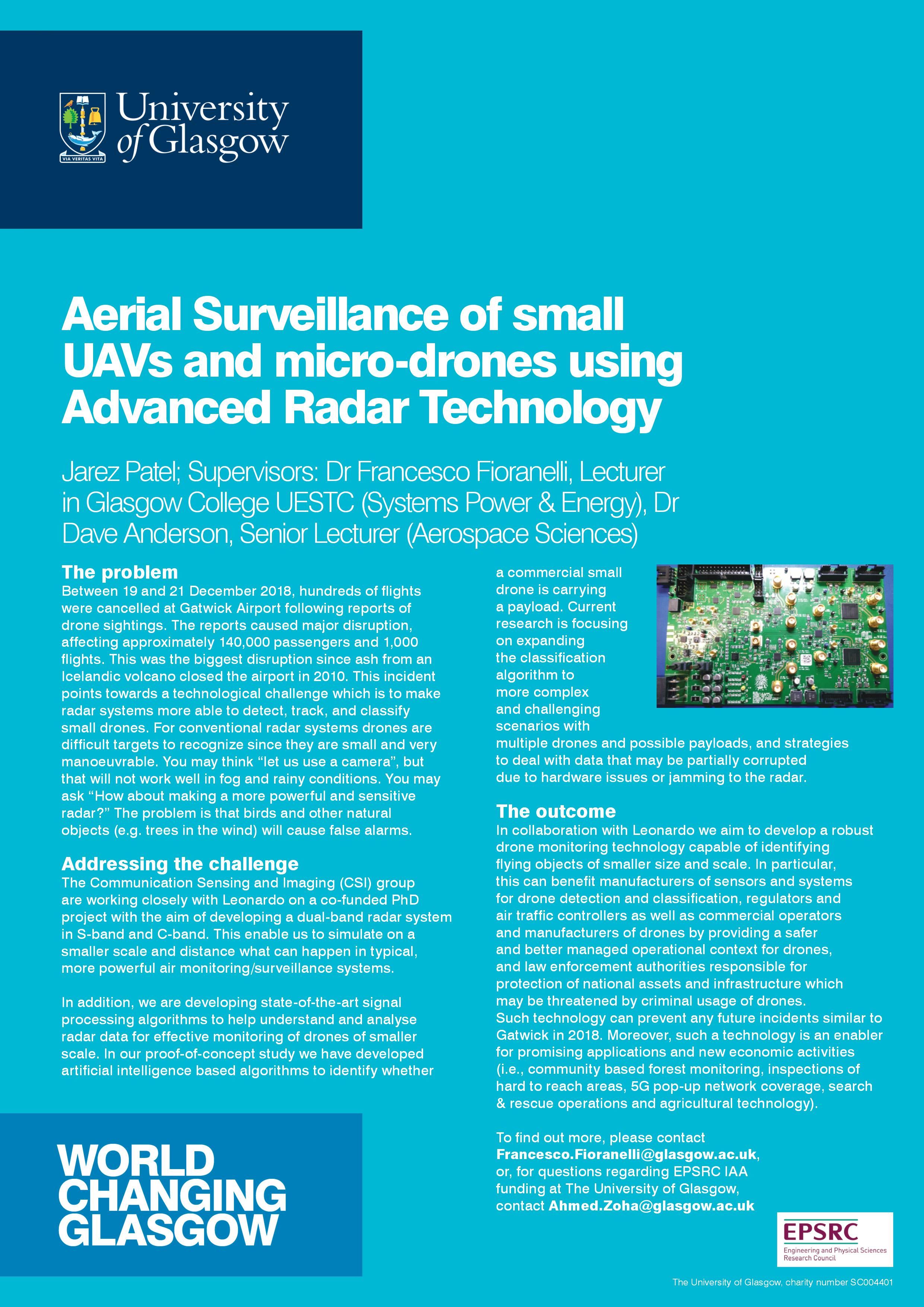 Between 19th and 21st December 2018, hundreds of flights were cancelled at gatwick airport following reports of drone sightings. the reports caused major disruption, affecting approximately 140,000 passengers and 1,000 flights. This was the biggest disruption since ash from an Iceland volcano closed the airport in 2010. This incident points towards a technological challenge which is to make radar systems more able to detect, track, and classify small drones. For conventional radar systems drones are difficult targets to recognize since they are small and very manoeuvrable. You may think “let us use a camera”, but that will not work well in fog and rainy conditions. You may ask “how about making a more powerful and sensitive radar?” the problem is that birds and other natural objects (e.g. trees in the wind) will cause false alarms.

The communication sensing and imaging (CSI) group are working closely with Leonardo on a co-funded PhD project with the aim of developing a dual-band radar system in s-band and c-band. This enables the team to simulate on a smaller scale and distance what can happen in typical, more powerful air monitoring/surveillance systems.

In addition, they are developing state-of-the-art signal processing algorithms to help understand and analyse radar data for effective monitoring of drones of smaller scale. In a proof-of-concept study, artificial intelligence based algorithms were developed to identify whether a commercial small drone is carrying a payload. Current research focuses on expanding the classification algorithm to more complex and challenging scenarios with multiple drones and possible payloads and strategies to deal with data that may be partially corrupted due to hardware issues or jamming to the radar.

In collaboration with Leonardo the team aims to develop a robust drone monitoring technology capable of identifying flying objects of smaller size and scale. In particular, this can benefit manufacturers of sensors and systems for drone detection and classification, regulators and air traffic controllers as well as commercial operators and manufacturers of drones by providing a safer and better managed operational context for drones, and law enforcement authorities responsible for protection of national assets and infrastructure which may be threatened by criminal usage of drones.

Such technology can prevent any future incidents similar to Gatwick in 2018. Moreover, such a technology is an enabler for promising applications and new economic activities (i.e., community based forest monitoring, inspections of hard to reach areas, 5G pop-up network coverage, search & rescue operations and agricultural technology).