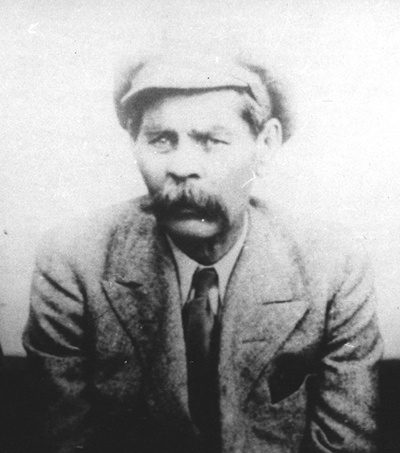 After a turbulent youth Gor’kii published novels and short stories about the poorest social classes gaining him immediate universal success. He began to be recognised as the literary voice for the lowest class of society and by 1889 he was openly supporting the Marxist-Social Democratic movement, advocating for the social, political and cultural rebuilding of Russia. Gor’kii was universally popular with the intelligentsia and the growing conscious working classes.

In 1929 Gork’ii visited the Solovki Camp. For many of the prisoners the presence of Gor’kii in the camp was contradictory. Gor’kii was a writer who was popular with the intelligentsia, many of whom were imprisoned at the Solovki (poet Iurii Kazarnovskii had even written an unanswered appeal to Gork’ii during his trial) yet his visit placed him firmly on the side of the administration. Gor’kii wrote and published an account of his visit to the Solovki praising it as a sign of Soviet strength, without making any reference to the terrible conditions in the camp. His article was published at a time when international attention was beginning to focus on the Soviet camps and their methods of ‘re-education’.

Gor’kii returned to Russia permanently in 1932 working for Stalin. His work from this period was instrumental to the formation of a new Soviet literary style: Socialist Realism. Gor’kii died in mysterious circumstances in 1936.

Image: Maksim Gor'kii during his visit to the camp. © International Memorial Moscow.