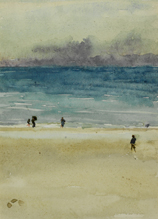 James McNeill Whistler (1834–1903) was a highly accomplished and innovative exponent of watercolour. This display presents over 20 of the finest examples from the University of Glasgow’s Whistler Collection, a major resource for the study of his life and work, together with examples of related prints, a selection of Whistler’s painting materials, and a specially-commissioned film illustrating his technique.

The exhibition is the result of a pioneering investigation into Whistler’s watercolours, currently being carried out by University of Glasgow (History of Art) staff in collaboration with the Freer Gallery of Art, Washington DC.  The results reveal Whistler’s technique to be richer and more varied than previously assumed and demonstrate the dynamic relationship between the watercolours and Whistler’s experiments in oil, etching and lithography. Future research will investigate the pigments, materials and papers used.

Whistler received a grounding in historic traditions of watercolour painting as a cadet at the U.S. Military Academy, West Point, during the early 1850s. By the 1870s, however, he had developed his own expressive language of diluted watercolour paint, layering washes on the paper to achieve varying optical effects and to exploit paper texture. This evolved further in his depictions of shop fronts and coastal scenes in the 1880s and 90s.

The watercolours were exhibited in three one-man exhibitions, in London in 1884 and 1886, and New York in 1889, as well as at exhibitions in Brussels, Paris, Munich and elsewhere. Whistler was characteristically fastidious about their presentation, orchestrating wall colours, framing and lighting. The critics questioned their degree of finish, as they did with his work in other media: ‘delightful memoranda of colour or form’ … ‘eminently clever and effective jottings, but … the kind of things which artists do not usually exhibit.’

This new site is the research hub for the 'James McNeill Whistler and Watercolour: Making and Meaning' project. Led by History of Art staff at the University of Glasgow, in collaboration with colleagues at the Freer Gallery of Art, Smithsonian Institution, Washington DC and Tate Britain, the project investigates the materials and context of Whistler's work in watercolour through historical and technical analysis. Visit the site.