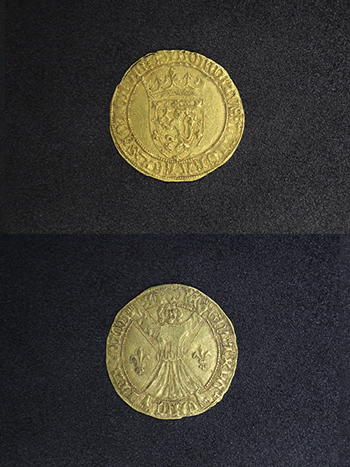 Issuing coinage is an important symbol of a nation’s independence, status and power.

Scotland struck its own coins for hundreds of years before the Act of Union with England created a British coinage in 1707.

Increasing varieties of denominations made the Scottish coinage one of most diverse and exciting in Europe.

From nobles, lions, unicorns, ryals and testoons to merks, dollars, bawbees, groats and placks, Scotland’s Own Coinage features a spectacular variety of gold, silver and base metal coinage to explore. 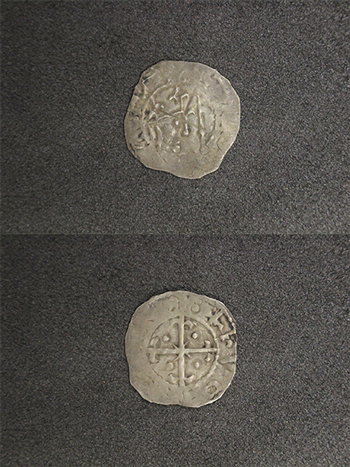 The Romans spread their coinage across the Empire from North Africa to the Antonine Wall.

Archaeological evidence indicates that Anglo-Saxon, Viking and English coins also circulated in Scotland before the introduction of a Scottish coinage in the 12th century.

The first king of Scots to issue his own coins was David I (1124-1153) in 1136 when his forces captured the English mint at Carlisle and nearby silver mines. 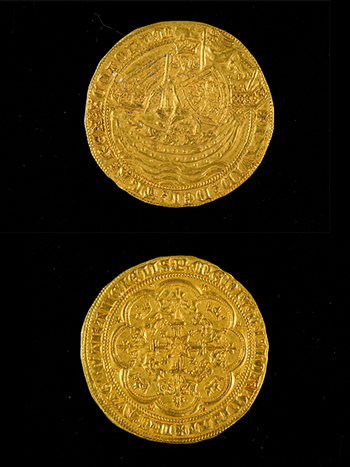 During his reign, a reduction in weight took place due to the difficulty of obtaining enough silver bullion. This resulted in Edward III decreeing that Scottish coins would no longer be accepted as equal tender in England.

Robert III (1390-1406) instituted a regular gold coinage and debasement, the adding of alloy to silver. This increased the disparity between the Scottish and English coinages. 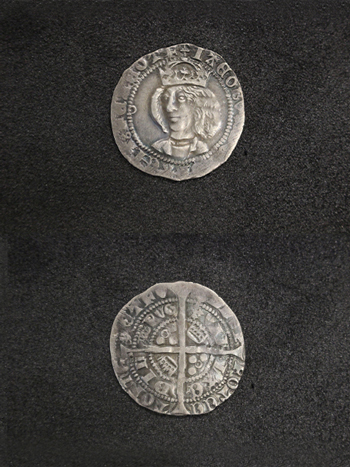 He introduced unicorns, charging riders and a new ‘renaissance’ portrait. It was also under James III that the thistle was depicted on a Scottish coin for the first time.

The production of lesser value debased silver coinage (billon) such as pennies, placks and bawbees increased, allowing more people to have access to and use coins in everyday life. 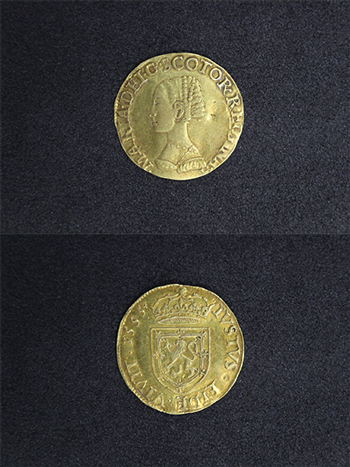 Mary’s coinages feature exquisite portraits, the introduction of new silver denominations, the ryal and testoon, and the last coins struck outside Edinburgh.

Union of the Crowns 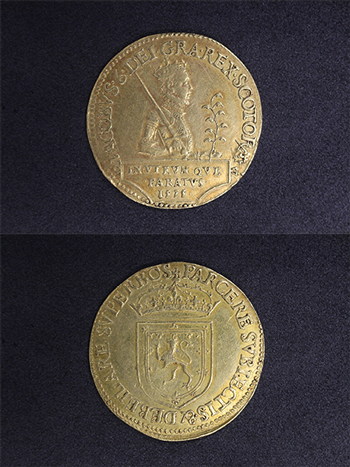 When Mary Queen of Scots abdicated in 1567, her one-year-old son was proclaimed king.

James VI went on to rule Scotland for 36 years, succeeding Elizabeth I as James I of England, and maintaining both thrones until his death in 1625. His coins are amongst the most spectacular of any Scottish monarch.

In 1603, James changed the Scottish coinage to the English pattern and re-established uniformity of weight and fineness. His reign also saw the issue of the largest Scottish gold coin, the 20-pound piece; the saltire plack marked the last appearance of billon. 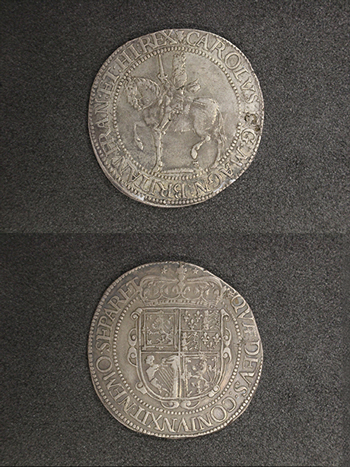 Charles I’s (1625-1649) tumultuous reign was defined by a series of brutal civil wars that saw the defeat of the Royalist cause, the dissolution of the monarchy and regicide in 1649.

Two moneyers made their mark: Nicholas Briot and his Scottish son-in-law, John Falconer.

Briot was appointed Master of the Mint in Scotland by Charles I in 1635. He left Scotland three years later, but Falconer remained and took over sole control.

After the Restoration, Falconer was responsible for the Scottish coinage of Charles II. 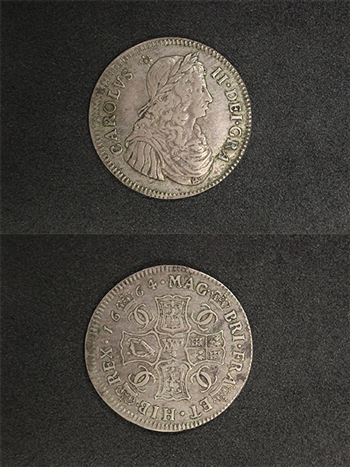 No Scottish coins were struck during Oliver Cromwell’s Commonwealth. It was only after the restoration of Charles II in 1660 that the mint in Edinburgh began production once more. Only silver and copper coins were issued.

However, scandal enveloped the mint. Officials were accused of illegal activities, with the result that it closed in 1682.

Three years later, James VII/II acceded to the throne. His Scottish issues were limited as, although the Edinburgh mint re-opened in 1687, James was deposed in the Glorious Revolution the following year. 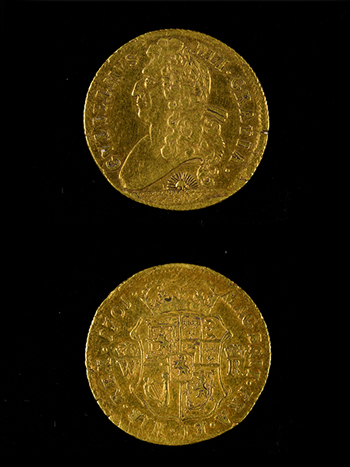 William and Mary’s coronation took place the following year. Mary died in 1694, after which the last Scottish gold coinage made a brief appearance.

Queen Anne (1702-1714) oversaw the Act of Union in 1707. The English and Scottish coinages were unified so that values were the same north and south of the border.

With the production of the last silver half-crowns and shillings in 1709, an extraordinary era of Scottish numismatics came quietly to an end. 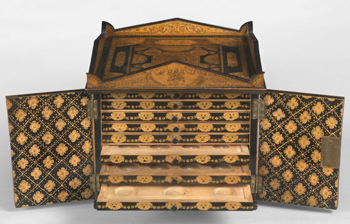 This maple wood coin cabinet, decorated with penwork, is in the shape of a Roman imperial cinerarium. It contains ten drawers to hold a total of 139 coins and medals. The arms of the Duke of Argyll are in the centre of the pediments on each of the four sides. It appears to date to circa 1805 and remained in the Argyll family until late in the 20th century. This unique and outstanding cabinet is of the greatest importance and a rare survival. Such cabinets were not uncommon after 1750 but the majority have long disappeared. 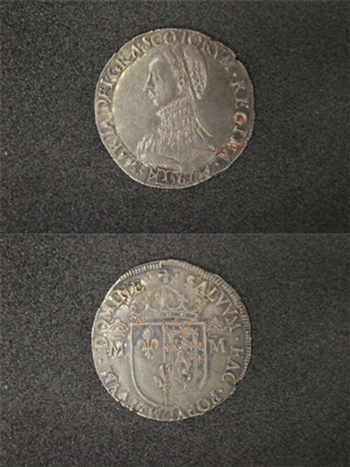 Dr William Hunter (1718-1783) acquired over 30,000 coins and medals in the last thirteen years of his life. At the time, his collection was regarded as being second only to the French Royal Cabinet.

William Cuthbert (1928-1999), a Perth solicitor, was a keen collector of maps and coins. His numismatic collection was donated to The Hunterian in 1999.

Lord Stewartby (1935- 2018) was a passionate numismatist since childhood. He trained as a banker, before being elected as a Member of Parliament and later serving in the House of Lords. He handed over his Scottish coins, the best such collection ever put together by a private individual, to The Hunterian in March 2017 for the benefit of research and the public.