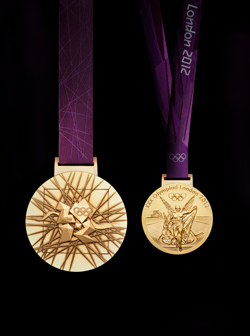 This July, hundreds of competitors from around the world will take part in the London 2012 Olympic and Paralympic Games. After years of arduous training each will strive to win a gold medal.

Visitors to The Hunterian have the unique opportunity to see London 2012 Olympic and Paralympic gold medals before the Games begin. The Hunterian Museum is the only venue in Scotland to display the medals which are on show from 10 until 22 July.

The front of the Olympic medal depicts Nike, the Greek Goddess of Victory, stepping out of the Parthenon and arriving in the host city. The reverse is a modern design symbolising the city of London and competition.

The Paralympic medal features a close-up section of an outstretched wing of Nike, the Greek Goddess of Victory, representing ‘Spirit in motion’ - forward flight, power and lightness - a natural metaphor for the spirit of the Paralympic Games. The reverse represents ‘The heart of victory’ - a depiction of the area close to the heart of the Goddess, symbolically chosen to reflect inclusion and togetherness at an historical event.‎ 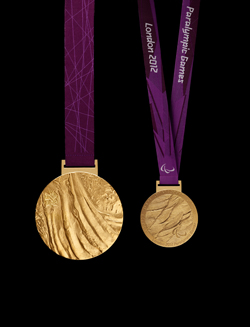 Gold, silver and bronze medals will be awarded at approximately 800 Victory Ceremonies across the London 2012 Olympic and Paralympic Games.

The two gold medals have been loaned to The Hunterian by The London Organising Committee of the Olympic and Paralympic Games.

The loan coincides with a new exhibition dedicated to medals in The Hunterian’s Kelvin Gallery. Modern Medals opens on 15 July and features almost 1000 modern art medals from all over the world, showcasing the amazing diversity of this type of miniature sculpture, now recognised as an art form in its own right.

Find out the latest from London 2012 HQ on their blog: http://www.london2012.com/blog or follow them on Twitter http://www.twitter.com/london2012