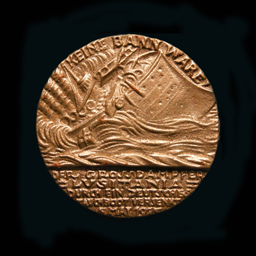 On 7 May 1915 the RMS Lusitania, a British ocean liner operated by the Cunard Line and carrying over 1000 passengers and crew, was sunk on her return voyage from New York to Liverpool by a German submarine.

This new display outlines the story behind the medals created in the wake of the sinking and is part of the continuing WWI commemorations.

Medals originating in both Britain and Germany form part of the display, the designs of which caused a furore at the time. Discover their origin and the journey which led to them becoming part of The Hunterian collection.

Night at the Museum: WW1 and RMS Lusitania