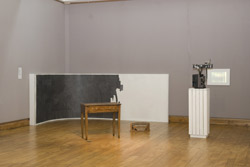 This new exhibition features a group of pivotal works by Turner Prize-nominee Lucy Skaer. Skaer employs a variety of media, including drawing, sculpture, film and installation. She creates work both visually compelling and elusive; continuously questioning the relationship between representation and reality.

Lucy Skaer includes the installation of four key pieces, a drawing, a 16mm film, and two wooden sculptures – inspired by the surrealist artist Leonora Carrington, whom Skaer visited in 2006 wanting to better understand the dialectics of her own practice. These were first shown under the title 'Leonora' in Basel, 2006, and subsequently at the Venice Biennale in 2007. Like much of Skaer’s practice, these works describe not the reality of the encounter, but rather its effect on the artist's intellect and emotions.

The programme accompanying the exhibition includes screenings of several 16mm films which Skaer made in collaboration with Beck's Futures Prize-winner Rosalind Nashashibi.

Lucy Skaer is part of GENERATION - a landmark series of exhibitions tracing the remarkable development of contemporary art in Scotland over the last 25 years. It will bring an ambitious and extensive programme of works of art by over 100 artists to over 60 galleries, exhibition spaces and venues the length and breadth of the nation between March – November 2014, with the majority of exhibitions taking place over the summer of 2014, as part of the Glasgow 2014 Cultural Programme.