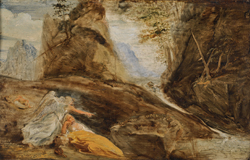 This new exhibition is dedicated to the Runciman brothers, John (1744 – 1768) and Alexander (1736 – 1785), two of the most versatile and talented figures in 18th century Scottish art. At its heart is a very important addition to The Hunterian collection, an oil painting by John Runciman titled Hagar and the Angel.

The rare work was allocated to The Hunterian in 2010 as part of the Acceptance in Lieu scheme and forms the centrepiece of the exhibition.

The Hunterian is home to one of the world’s best groups of works by the Runciman brothers and a selection will feature in the exhibition, including several prints. The Hunterian is also home to one of the earliest known works by John Runciman - an etching from 1764 titled The Taking Down of the Netherbow, which depicts the dismantling of Edinburgh’s 16th century eastern gate. 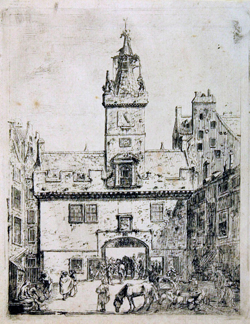 Very few of John Runciman’s paintings survive and The Hunterian is very fortunate to be able to add Hagar and the Angel to its collection. Because of its Age of Enlightenment foundations, The Hunterian is committed to developing its collection of 18th century Scottish art. Hagar and the Angel is a very significant addition, not only filling a gap but also highlighting the growing range and diversity of Scottish art of that period.

Enjoy our new sound and visual installation in the exhibition from 21-26 May 2013! 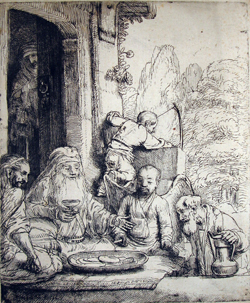 Painted in the 1760s, Hagar and the Angel belongs to a small group of religious paintings by John Runciman that mark an important step in the development of Scottish art. It depicts the scene from the Book of Genesis, in which Hagar and her son have been cast out of Abraham's house. Without water and fearing for her child, Hagar prays to God, who sends an angel to point to a miraculously welling stream.

As well as works by both John and Alexander Runciman, the exhibition also features a small group of works by Old Masters such as Rembrandt and Raphael. These works illustrate the enduring popularity of the biblical story amongst artists and highlight John’s original approach. 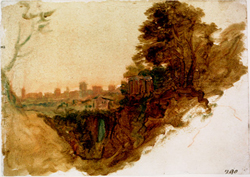 John and Alexander trained as decorative painters in Edinburgh but wanted to be History painters. In the 18th century, Scottish art was limited to the traditional genres of portraiture and landscape so in 1767, the brothers left to study in Italy. In Rome they became familiar with a circle of leading international artists including fellow Scot Gavin Hamilton, James Barry from Ireland and the Henry Fuseli from Switzerland. 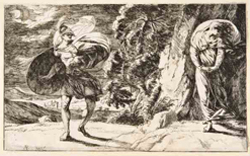 John’s promising career was cut short when he died of tuberculosis within a year of his arrival in Italy. Alexander returned to Edinburgh in 1771, where he became one of Scotland’s leading late 18th century artists.

The works on display in this new exhibition highlight the brothers’ originality, their ability to re-interpret the styles of the Old Masters in an inventive way, and their pioneering interest in the traditions and past of their own country, from the story of the Celtic bard Ossian to the plays and poems of early 18th century Scottish literary hero James Thomson.

Image 1: Alexander Runciman, Temple of the Sibyl at Tivoli c.1770.