A Synchronology: The Contemporary and Other Times

A Synchronology is a group exhibition featuring contemporary art works in several mediums which deal with temporality, with the politics of time, with time’s passage and its recollection.

‌The artists included in A Synchronology have all featured in the exhibitions, projects and events curated by Glasgow-based organisation The Common Guild over the past decade.

‌The Hunterian has collaborated with The Common Guild to curate this exhibition, which marks The Common Guild’s 10th anniversary and is itself a reflection on how time is marked. 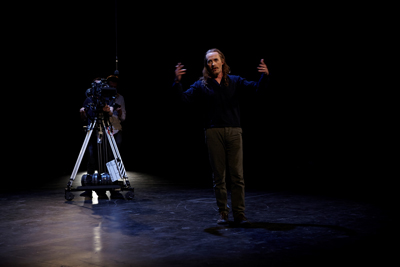 Tacita Dean’s Event for a Stage (2015) sees this acclaimed artist rework her first foray into live theatre into a rich and complex 16mm film. Dean was commissioned by the 2014 Sydney Biennial to make a project in a theatre, and the result was  a fierce interplay with the actor Stephen Dillane, culminating in four performances over consecutive evenings. Dean filmed the performances, and Event for a Stage uses that material to make dazzling plays with time, with fiction and artifice, and with the relationships between art, film and theatre. Having often focused on individuals (especially other artists), Dean here attempts to film, as Event for a Stage’s script suggests, ‘a process, a craft, a profession.’

In his 2002 film Baghdad Screentests, artist Phil Collins borrows the iconic format of Andy Warhol’s screentests – the short, silent films that recorded the stars and superstars who visited Warhol’s Factory in the 1960s – and applies it to ordinary inhabitants of the Iraqi capital. Collins’ empathetic, politically incisive work invites viewers to meet the gaze of 40 individuals filmed less than a year before Baghdad came under attack in Iraq War.

Collins and Warhol scholar Dr Glyn Davis (Edinburgh College of Art) will be present to discuss the work.

Artist Gerard Byrne will introduce this special screening of Stanley Kubrick’s 1975 masterpiece Barry Lyndon. The screening takes place at the GFT as part of their ‘Crossing the Line’ strand. It marks the closing of the exhibition A Synchronology: the contemporary and other times at The Hunterian, which includes Byrne's work.

All welcome. More information, trailer and tickets available via the GFT website.

Barry Lyndon
Legendary director Stanley Kubrick’s tenth feature film is one of his finest and most influential films and has been named as one of the greatest films ever made in polls including Sight & Sound and Time. In this adaption of William Makepeace Thackeray’s novel about the exploits of an 18th century Irish adventurer, Ryan O’Neal stars as Redmond Barry (later Barry Lyndon) and Marisa Berenson is Lady Lyndon. Among the great supporting cast are Patrick McGee, Hardy Krüger, Diana Koerner, Leon Vitali, Steven Berkoff, Murray Melvin and Leonard Rossiter.

Only a cinema screen can do justice to the stunning visuals of Barry Lyndon. Kubrick went to incredible lengths in his research of the period in order to recreate it accurately. Inspired by painters such as Thomas Gainsborough and William Hogarth, the film has a beautiful, painterly look, enhanced by filming in natural or historically accurate light sources. Some scenes were lit only by candlelight, captured by the super-fast lenses of Oscar-winning cinematographer John Alcott. (From bfi.org).

Gerard Byrne
Visually rich and intellectually complex, the work of Gerard Byrne in photography, film, theatre and multi-screen installation examines the slippage between time and the act of image creation. Characterised by a laconic humour, Byrne’s projects examine the ambiguities of language and of what is gained or lost in the translation from text to image. By reconstructing historically charged conversations, interviews and performances, from sources as diverse as La Revolution Surréaliste, Playboy and National Geographic, Byrne tests our perception of the past and the present, and the inherent challenges of the visual record. Ongoing photographic series, such as In the News and Loch Ness, demonstrate that while images are fixed in time they are also interpreted in flux – a situation that both creates and distorts our knowledge of what came before. Byrne is precise in his research and analysis of the relationship between time, documentation and an identifiable visual language, and while each of his distinct bodies of work is conceived independently, they resonate together as being made in relation to a specific, but malleable historical referent.