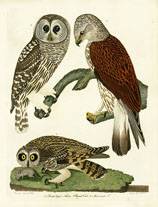 On the 200th anniversary of his death, this exhibition celebrates the achievements of Alexander Wilson’s remarkable life as a naturalist, poet and artist. A true son of the Enlightenment, he was a gifted scientist, painter, poet and social commentator. Well recognised in the States as the founding father of the science of ornithology, he is almost forgotten in his native Scotland.

This exhibition highlights Wilson’s contribution to the science of ornithology and presents some of the research being carried out by the University of Glasgow into this exciting field of science. 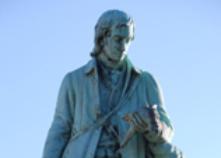 Born in Paisley on 6 July 1766, Wilson left school at the age of 12 and had no further formal education. He trained for five years as a weaver, and then travelled around central Scotland as a pedlar. Thoughtful, politically active and interested in the natural world, he was strongly influenced by local poets such as Robert Burns. Wilson wrote poetry in the Scottish dialect, some criticising mill owners and their treatment of the weavers. Following the publication of one of these poems, Wilson was forced to burn copies in Paisley market place and imprisoned for two weeks in the Paisley Tolbooth. In 1794, he emigrated to the United States and never returned.

Arriving in America as an impoverished and relatively uneducated 28-year-old, Wilson became a school teacher and resumed his poetic writing. Befriended by Philadelphia naturalist William Bartram, his interest in nature flourished. he embarked on an ambitious project to document the birds of North America. He undertook long, ardious and hazardous journeys through vast areas of the American countryside, much of it on foot, and most often alone. He produced a magnificent nine volume work American Ornithology (1808 - 1814) and became a highly respected figure in the flourishing scientific centre of Philadelphia. However his exhaustive travelling contributed to his early death from dysentry in 1813.

‘I was a wanderer when I was in Scotland, and I have been much more so since my arrival here. Few Americans have seen more of their country than I have done, and none love it more’. 8th November 1811

Literary men of reformist politics faced a difficult time in 1790s Scotland. Suspicious of the energies unleashed by the French Revolution, the authorities clamped down on those challenging the established order. Alexander Wilson did enjoy some fame in Scotland. His Laurel Disputed on the history of poetry in Scots was a work he recited at a poetry competition in Edinburgh in 1791, to a great deal of popular acclaim. Even more successful, Watty and Meg was a virtuoso performance in Scots that sold in large numbers in broadside form in 1792 and was assumed by many to be the work of Robert Burns. A hugely promising Pastoral poet, Wilson suffered the nadir of his career when, he fell foul of the law for having libelled a Paisley mill owner in his poem The Shark, or, Lang Mills Detected, a work that took the side of his fellow-weavers in a dispute about pay.

Leaving his homeland, Wilson formed part of a remarkable group of ‘Trans-Atlantic’ Scottish radicals of the 1790s along with the likes of James ‘Balloon’ Tytler and James Thomson Callender. The latter two became political journalists. In America all three continued to espouse the ‘liberty’ they felt they were fully denied in the Britain they had fled. The thread that runs through all of this activity is the Enlightenment science and, indeed, optimism that was to make Wilson and Callender even more notable in American cultural history than they had been in the Scottish variety.

Wilson collected, painted and carefully detailed the habitat and behaviour of the birds he found, describing 268 species, including 26 new species. He preserved the birds he collected and deposited the skins in Charles’s Willson Peale’s museum in Philadelphia, the first public museum in America.

His text is evocative and vivid, his talent as a writer shining through. Without financial backing, Wilson’s expensive work was financed by subscribers that he recruited. The first of his nine volumes was published in 1808, and the last posthumously in 1814. Wilson took a scientific approach to his work, and was dismissive of fabricated stories, for example that swallows hibernated in river and pond mud during winter.

The most famous painter of American birds is John James Audubon (1785-1851). A chance meeting between the two in Louisville in 1810, when Wilson was seeking subscribers for his work, later sparked off one of the fiercest controversies in the history of ornithology. Audubon declined to subscribe, but the two men spent a short time together collecting and painting birds. After Wilson’s death, Audubon met with intense opposition from the Philadelphia scientific community when trying to publish his own work. His less scientific approach, and the sometimes unnatural poses in his bird illustrations, were highly criticised as ‘baroque calendar art’. Unphased by this, which he described as ‘smoke from a dunghill’, Audubon nonetheless had to travel to Edinburgh, and later London, to get his paintings published.

In 1835, 22 years after Wilson’s death, Audubon claimed that Wilson had copied one of his paintings – the small headed flycatcher, a species which has in fact never been identified. Wilson’s supporters, particularly his friend George Ord, were enraged. They pointed to several birds that Audubon appeared to have copied from Wilson. The controversy continues to this day.

Wilson established the need for accurate recording of species and biodiversity more generally, and his much more scientific approach paved the way for future study. His work is regarded as the first great work in American ornithology, which has been ‘revised and extended, but not superseded’. Its value was widely appreciated at the time of its production, and he received strong support from the Academy of Natural Sciences in Philadelphia. Thomas Jefferson (3rd President of the United States) was one of his early subscribers. Wilson’s life has been described as ‘the complete triumph of genius over want of education’. An international scientific society ‘The Wilson Ornithological Society’ founded in the US in 1888 promotes the scientific study of birds. It publishes scientific papers in the Wilson Journal of Ornithology, and holds annual scientific meetings. The genus of warblers Wilsonia is named after Wilson, as are five other bird species.