Our latest Museum Object in Focus is a pair of Magdeburg Hemispheres, GLAHM:113784, on display in the Hunterian Museum entrance gallery. 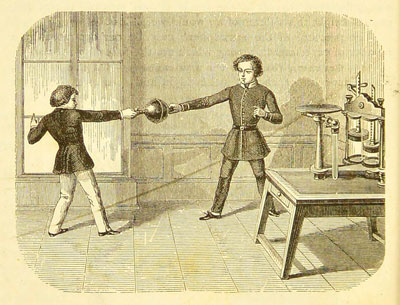 Two students put a pair of Magdeburg Hemispheres to the test. On a table on the right can be seen the air pump used to evacuate the hemispheres.
From E. Atkinson, Natural Philosophy for General Readers and Young Persons, translated and edited from Ganot's Cours Élémentaire de Physique, Third Edition, London 1878, p.106, Fig. 95. Photograph: Wellcome Library, London.

The hemispheres were manufactured by the company John J. Griffin and Sons, London, are made of cast iron and brass and are painted red. They are part of The Hunterian's collection of teaching and demonstration devices used in the University of Glasgow's Natural Philosophy Laboratory in the late 19th and early 20th centuries, a subset of The Hunterian's scientific instrument collection. University records of purchases and inventories indicate they were purchased, and hence presumably manufactured, sometime between 1875 and 1889.

In the late 19th and early 20th centuries University of Glasgow students would have used this pair of hemispheres to experience the properties of airs ("gaseous fluids"), whilst also learning to operate complex instruments such as air pumps. Manipulation of varied apparatus and materials introduced students to the principles and causes of pneumatic, hydrostatic, acoustic, optical, electrical and magnetic phenomena. The hemispheres are both marked 'L.P.2', identifying them as Pneumatics item No.2 in the Laboratory. 'L.P.1' is mentioned in University records, but probably does not survive.

The 'Magdeburg Hemispheres' experiment dramatically demonstrates the strength and properties of atmospheric pressure. When two hollow hemispheres are fitted together they are initially easy to separate, because the external atmospheric pressure is equalised by the internal air pressure. When air is pumped out of them using an air pump and the stopcock is closed, creating a partial vacuum, they become impossible to separate without great strength, because of the crushing external pressure. It makes no difference whether the hemispheres are horizontal, vertical, or in any other orientation, showing that atmospheric pressure acts in all directions equally.

This demonstration was first made in the 1650s when Otto von Guericke, Mayor of Magdeburg, orchestrated a theatrical outdoor display of teams of horses trying to pull apart a pair of 50 cm diameter hemispheres that to this day are on display in the Deutsches Museum in Munich.

A set of notes of lectures by William Thomson, later Lord Kelvin, made by one of his students in 1850, and held in the University Archives and Special Collections, sadly does not record the details of the relevant lectures on Pneumatics, but it is reasonable to assume that Thomson described and perhaps demonstrated this standard and dramatic experiment.

Standard textbooks such as Ganot's Natural Philosophy for General Readers and Young Persons provide helpful insights into how demonstrations and experiments such as the Magdeburg hemispheres would have been used in teaching spaces, such as in this illustration which depicts what is probably a slightly older boy teaching his younger brother, or cousin, philosophical and experimental principles and practices he has learned at the University. To the right of the image is a double-barreled air pump used to evacuate air from the hemispheres. We have no such item in the Hunterian's collection, but a different type of air pump, certainly from the late 19th century, GLAHM:113785, could plausibly have been used in conjunction with the hemispheres in the Glasgow classroom.

We are in the process of bringing together our collections, which have previously been held in multiple, sometimes remote sites, into our new centralised storage at our Collections Study Centre at Kelvin Hall, and in the process are making and remaking connections between objects and all the while learning new things. Look out for more discoveries and connections in future Museum Object in Focus displays!

Two students put a pair of Magdeburg Hemispheres to the test. On a table on the right can be seen the air pump used to evacuate the hemispheres.
From E. Atkinson, Natural Philosophy for General Readers and Young Persons, translated and edited from Ganot's Cours Élémentaire de Physique, Third Edition, London 1878, p.106, Fig. 95. Photograph: Wellcome Library, London.