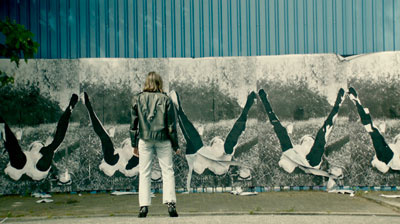 A major new film co-commissioned by The Hunterian will launch as part of next year’s Glasgow International.

Quarantaine, an ambitious new film by Georgina Starr, was co-commissioned by Film and Video Umbrella, The Hunterian, Leeds Art Gallery and GI, with Art Fund support through the Moving Image Fund for Museums.

Its title refers to the French word for ‘forty’, and also alludes to the period of enforced isolation commonly known as quarantine. Through multiple chapters, it follows the initiation of two new recruits into a mysterious, clandestine sisterhood whose pursuit of esoteric knowledge takes place in a secret house of instruction.

Contrasting what seems like a cult-like focus on strict supervision and mind control with other more unruly rituals of mind expansion and extra-sensory perception, Quarantaine continues Starr’s preoccupation with the otherworldly and the occult, and her longstanding interests in the visionary aspects of experimental cinema, to further her exploration of the hidden recesses of the creative imagination.

Quarantaine will preview at Tramway in Glasgow as part of Glasgow International from 23 April until 10 May 2020 and then at Leeds Art Gallery from 18 June until 13 September 2020.

Quarantaine (2020) by Georgina Starr is co-commissioned by Film and Video Umbrella, The Hunterian, Glasgow, Leeds Art Gallery and Glasgow International with Art Fund support through the Moving Image Fund for Museums. This programme is made possible thanks to Thomas Dane Gallery and a group of private galleries and individuals.