Glasgow will face off with a new dinosaur as Trix the T.rex comes to Town 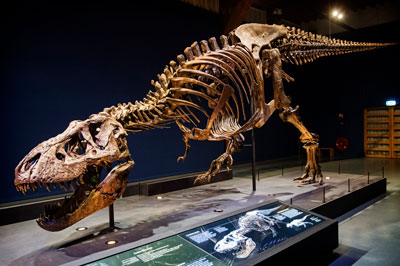 Visitors to Glasgow will get an amazing opportunity to see one of the best preserved Tyrannosaurus rex skeletons when it visits Scotland on the last leg of its European tour.

As tickets went on sale today (Monday 4 February), the organisers also released the details of the Glasgow visit of the only real T. rex skeleton on tour anywhere in the world.

The T.rex skeleton will greet visitors in attack mode, with her ferocious teeth and enormous head mounted at eye level, when it goes on display at Glasgow’s Kelvin Hall from Easter this year.

She is touring European cities while she waits for a new museum building to be completed at Naturalis Biodiversity Centre in her home city of Leiden, in the Netherlands.

Glasgow is the final stop for Trix’s tour of Europe. Her Scottish visit will be the first and only stop outside mainland Europe. She has already visited Salzburg, Austria; Barcelona, Spain; Paris, France; and Lisbon, Portugal.

She will travel from her home in the Netherlands to Glasgow to go on display in the city from 18 April to 31 July 2019.

This is another major dinosaur coup for Glasgow. Trix’s visit comes just weeks after Dippy the Diplodocus skeleton cast went on display at the Kelvingrove Art Gallery and Museum just a stone’s throw from Kelvin Hall.

And for a few short weeks, both Dippy and Trix will be in Glasgow at the same time as Dino-fever turns the west end of the city into Scotland’s Dino-quarter.

The exhibition has been organised by The Hunterian at the University of Glasgow and Glasgow Museums and has been supplied by Naturalis Biodiversity Centre.

“Trix is a superb example of one of the world’s best preserved T.rex skeletons. Her arrival in Scotland will be a unique opportunity to see up close a real T.rex which is one of the fiercest predators to have ever lived.

“I am so looking forward to welcoming visitors to Kelvin Hall and see their reaction to the sheer size and scale of Trix. I can tell you, having gone nose to nose with this 67- million-year-old fossil myself, that this is an experience not to be missed.

“Through our strong partnerships both with Glasgow Museums and with European institutions we have been able to ensure that Trix was able to visit Scotland on her first and only British tour date.

“This is a major coup for Glasgow – with two dinosaurs, Trix and Dippy, visiting our city at the same time for a short while. Dino-fever will take over the west end of Glasgow as the city becomes the dinosaur capital of Scotland.”

“We are immensely proud of our partnership with The Hunterian and Naturalis to bring one of the three most complete Tyrannosaurus rex skeletons ever discovered to Kelvin Hall in April.

“Trix, as she is affectionately known, is the only original T. rex skeleton on tour anywhere in the world. It’s only when you see her up close that you begin to appreciate her actual size - she’s enormous. Glaswegians and visitors to the city will relish this unique opportunity to come face-to-face with one of the most terrifying predators ever to have stalked the earth.

“Our enduring fascination with dinosaurs is down to the way they spark our imagination. They come in a huge variety of shapes and sizes and we find it amazing to think they really existed.

“Dippy, the Natural History Museum’s famous Diplodocus, opened to rapturous applause at Kelvingrove Museum last month and soon people will be able to marvel at not one, but two, incredible creatures – a mere dinosaur jump apart.

“We look forward to welcoming thousands of dinosaur fans to Glasgow over the coming months and trust these spectacular exhibitions will inspire curiosity about the natural world around us.”

Visitors will be able to find out more about Trix’s turbulent life from the information revealed by her bones in findings by an international research team of palaeontologists and geologists.

“Trix was around 30 when she died – making her the oldest T.rex found to date. She is also one of the most complete T. rex fossil’s known and Trix may in fact be able to trace her ancestry back to the Middle Jurassic of Scotland.

“Scotland is one of very few places worldwide where Middle Jurassic bones can be found. The Hunterian collected the first dinosaur footprints on the Isle of Skye in 1982 and has been at the forefront of dinosaur research in Scotland since then. And along with Trix, we will have some of the Scottish dinosaur footprints on display during her visit to Kelvin Hall.

“It is very exciting to be able to get close to such an amazing T.rex specimen. It seems very fitting to welcome our dinosaur cousin to Scotland.”

After her three months in Scotland’s largest city, Trix will return to her home at the Naturalis Biodiversity Centre in Leiden when its new museum building opens in August 2019 to visitors.

Further information including opening hours and booking information can be found on the Kelvin Hall website.