Runaway Slaves has made a global impact, inspiring films, plays, educational resources and a version of the popular Minecraft computer game, all helping to tell the stories of what might have become of the escaped slaves. A graphic novel, Freedom Bound, has been distributed to every secondary school in Scotland to help pupils learn about the country’s connections to the slave trade.

Their story is our story

We may only know their first name, or a tiny part of their story. Most of them have completely disappeared from history after fleeing their white masters. But thanks to award-winning research by our School of Humanities, a little-known group of people who arrived in the UK in the 1700s as someone else’s property has been brought to life: runaway slaves.

This year, many in the University have added their names in support of the Black Lives Matter movement, from students and staff to our new Chancellor, Dame Katherine Grainger. But speaking out and highlighting inequality has long been a feature of our history at UofG and was exemplified in 2018 with the launch of a major resource, Runaway Slaves in Britain.

The result of three years of research, Runaway Slaves catalogues around 800 Scottish and English newspaper advertisements printed between 1700 and 1780 which appeal for the return of slaves who had absconded from their owners.

Many people have thought and been taught that slavery was something that happened in the colonies, and that Britain led the way in abolition. But our research shows that slavery was every bit as real here in Britain.
Professor Simon Newman

It’s impossible to be precise about numbers, but many thousands of slaves were brought to the UK in the 1700s by merchants and plantation owners, and in an era when the buying and selling of humans was routine practice, it was normal for those who escaped their captivity to be considered as property; and a reward offered for their return.

The advertisements offer rich but often disturbing detail and describe the slaves’ appearance, clothing and mannerisms, information the owners hoped would lead to their recapture. Some mention scars or brandings the slaves have suffered, and grim accessories such as metal collars engraved with their owners’ details.

The hope of the researchers involved is that the snippets will give an identity to those individuals who bravely challenged their enslaved status. “We hardly ever know anything other than what is included in the advertisement itself,” says Professor of History and Project Lead, Professor Simon Newman. “A successful escape meant disappearing from the record. These advertisements are important because they remind us that there was a time when slavery in Britain was routine and unremarkable.”

As the largest collection of information we have about enslaved people in 18th-century Britain, Runaway Slaves has helped to chronicle these individuals who had no voice of their own, and has deepened understanding into our links with slavery.

This article was first published September 2020.

Runaway Slaves has made a global impact, inspiring films, plays, educational resources and a version of the popular Minecraft computer game, all helping to tell the stories of what might have become of the escaped slaves. A graphic novel, Freedom Bound, has been distributed to every secondary school in Scotland to help pupils learn about the country’s connections to the slave trade.

These advertisements placed in local newspapers in the 18th century appealed for the return of escaped men, women and children to those who believed they owned them.

Run away on Sunday Night last, from on board the Providence of London, John Hendricx Commander, Joseph Kidd a Negro, aged about 28, tall and slender, a little hump shoulder’d, goes somewhat lame, has short curl’d Hair like other Negroes, speaks indifferent good English and Portuguise, stutters a little in his Speech, wears two Coats, one a Coffee-colour’d Hair Coat, the other of old Hair Camblet, old blue Breeches, light grey Yarn Stockings, a pair of new Shooes mark’d within the Flap W.C. Whoever brings him to his said Master in Virginia-street, near the Hermitage, shall have 20 s. Reward, besides Charges.
Flying Post or The Post Master, 4 January 1700

A Well-set Negro, commonly call’d Sugar, AGed about Twenty Years, Teeth broke before, and several Scars in both his Cheeks and Forehead, having absented from his Master, whoever secures him, and gives Notice to Benjamin Maynard at the Angel and Still at Deptford shall have a Guinea Reward, and reasonable Charges.
Weekly Journal or British Gazetteer, 18 October 1718

London, Sept. 28, 1722. Whereas a Negro Woman-Servant, known by the Name of Peggy, tall, slender, and well-shaped, dressed in a red and white Callico Gown, and round-ear’d Cap, and oftentimes in a white short Jacket, went away this Morning at 8 a Clock from her Mistress Anne Crofts, at Mr. Thomas Plumsted’s, Ironmonger, in Grace-Church-street, near East-cheap : This is to give Notice, That if she the said Peggy will return to her said Mistress Anne Crofts within eight Days, she shall meet with a kind Reception; or if any Person shall bring her to the said Mrs. Crofts at the Place aforesaid, shall have Two Guineas Reward. N.B. She is bound an Apprentice to the said Mrs. Crofts, therefore this is to give Notice, that whosoever shall detain her be it at their Peril.
Daily Courant, 29 September 1722 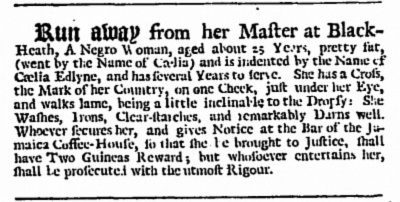 Run away from her Master at Black-Heath, A Negro Woman, aged about 25 Years, pretty fat, (went by the Name of Cælia) and is indented by the Name of Cælia Edlyne, and has several Years to serve. She has a Cross, the Mark of her Country, on one Cheek, just under her Eye, and walks lame, being a little inclinable to the Dropsy: She Washes, Irons, Clear-starches, and remarkably Darns well. Whoever secures her, and gives Notice at the Bar of the Jamaica Coffee-House, so that she be brought to Justice, shall have Two Guineas Reward; but whosoever entertains her, shall be prosecuted with the utmost Rigour.
Daily Journal, 8 August 1728

WHereas Andrew Scott, a Negro, middle-sized, much Pock-fretten, speaks very good English, plays on the Violin, and sounds a Trumpet, eloped from his Master Ballard Beckford, Esq; whoever will secure the said Andrew Scott, and bring him to Mr. Anthony Chamberlain in Spittle Square without Bishopgate, shall receive two Guineas as a Reward: And all Persons are forbid harbouring him at their Peril, he being the sole Property of his said Master.
Daily Post, 27 October 1732

WENT away from the House of Mr. Leonard Nix, Peruke-maker in Bow-Lane, Cheapside, the 8th Instant, a Black-Boy, called Shallo: He is about 15 Years of Age, five Feet two Inches high, or thereabouts, can play a little on the French Horn and Violin, comb Wigs and Shave, and had on when he went away a light-colour’d Fustian Frock and Breeches, a scratch’d brown Wig, and an old Hat: If he will immediately return he will be kindly received and his Faults forgiven; but whoever harbours him, he being an indented Servant to a Gentleman, will be prosecuted; Any Person who will secure and bring him to the said Leonard Nix, shall receive One Guinea Reward for their Trouble.
Public Advertiser, 10 August 1753

RUN away from Lancaster, on Sunday, January 25th last, and supposed to have attempted to procure a Passage to the Isleman from Liverpool, or some adjacent Port, as he came from thence, being purchased out of the French Privateer carried into that Island, A NEGRO MAN: He wore a Worsted Cap, a new Shirt, a Red Waistcoat, a Pair of Flannel Breeches, and speaks very little English. – Whoever secures or can give any Intelligence of him, shall receive a handsome Reward, by applying to R. Williamson, at the Register Office, near the Exchange, Liverpool, or Capt. Robert Dodson, in Lancaster.
Williamson’s Liverpool Advertiser and Mercantile Chronicle, 30 January 1761

In 2018, we became the first University to acknowledge our links to slavery and launch a major programme of reparative justice.

Slave trade isn't history; it is still around us

Glasgow Professor of Child & Adolescent Psychiatry Helen Minnis argues that challenging racism means that talented black people must get a seat at the table.