Matt Fountain (MA 2011) has been named our Young Alumnus of the Year for 2016. The annual award celebrates the achievements of recent graduates who have made a major contribution to the community, arts, sciences or business. It was established in 2001 as part of the University’s 550th birthday celebrations, and previous recipients have included Christopher Brookmyre, Emeli Sandé and Mhairi Black.

The social entrepreneur was chosen for the award due to his success in founding Freedom Bakery, an innovative new social enterprise which trains people in custody in the art of artisan breadmaking and teaches them skills which give them real value in the job market.

Currently, Freedom Bakery supplies a small number of outlets across Glasgow but a second bakery will open in the city in early 2017 where apprentices from HMP Low Moss will be able to continue their training on day release and jobs will be offered to people who have been traditionally excluded from employment. ‌ 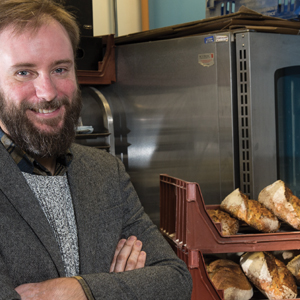 Matt says he felt “extremely honoured” to be made Young Alumnus of the Year 2016.

“I really learned how to learn at the University, and that helped me to basically do whatever I wanted," he says. ‌

"History of art is a subject that requires you to understand the world from many perspectives, to analyse by means that are sometimes not so obvious. In this respect it underlines my approach to business, where it can be a force for good yet robust."

Since setting up Freedom Bakery, Matt has given internship opportunities to three students from the University. He recruited his first intern through the University‘s Internship Hub with support from the Santander Universities matched-funding programme. This intern was a final-year undergraduate studying English literature and history of art.

“One of the defining principles of the Freedom Bakery is to encourage personal and professional development of the prisoners we work with," says Matt, "but the philosophy extends to the staff too."

This article was first published in December 2016.

An innovative alumni venture which helps homeless people care for their dogs has won a prestigious award.

Changing minds with an app

Dementia app MindMate, launched by a group of alumni, wins a prestigious award for entrepreneurship.