Biologist and conservationist Karina Atkinson was awarded Young Alumnus of the Year 2013 for her conservation work in Paraguay. In 2010, she established her award-winning not-for-profit conservation organisation Para La Tierra, which promotes conservation in fragile habitats in Paraguay through environmental education, community outreach and scientific research.

On the Reserva Natural Laguna Blanca in Paraguay, the Para La Tierra team led by Karina run a volunteer programme, work with rural communities and have established an education outreach programme for young people. The team of volunteers and professional scientists study the fascinating range of populations that exist in the area, from birds and insects to amphibians and mammals.

‘We have recently discovered a new species of frog for Paraguay,’ says Karina, who is passionate about her work and the wildlife she protects. ‘After three years of work it’s important to know that we’re still discovering new species and that we are doing the right thing for the area.’

Karina graduated with a BSc in Genetics from Glasgow. ‘My time at the University gave me a really strong grounding in biology and also that specialist experience that I could take to whatever job I wanted,’ she says. ‘I really enjoyed my experience at Glasgow. It was a great place to study, a great environment to be in and a great place to live.’

After completing her degree at Glasgow, she decided to join a gap year programme in Paraguay. It was a year that would change her life and take her career in a remarkable direction. ‘I went to Paraguay originally for a new adventure, for a new experience and to gain some perspective on where I was. I just fell in love with the fauna and flora of Paraguay and the work I was doing there and so I decided that I didn’t want to leave,’ she says. ‘I saw a real need for more conservation in the country, because at the time it seemed to be lacking. I thought, someone has to do something about this, and so I decided to try myself by creating Para La Tierra. Fortunately it has been a success.’

Karina’s modesty is underpinned by hard work and a unique vision, and Para La Tierra is becoming a template for conservation and sustainable tourism throughout the world. ‘I went out originally to do scientific research, but quickly realised that conservation needs more than that,’ she explains. ‘It has to involve communities and local people as well. That brought with it a lot of challenges, and it’s those challenges and that daily problem solving that really interest me about what I do now.’

In recognition of her work, she was awarded the prestigious Rolex Award for Enterprise in 2012, and she has plans to expand her organisation even further. ‘My goal for the future is to have created a model conservation organisation for Paraguay which I can then transfer to other fragile habitats around the country,’ she says. ‘I’d like to have a network of ecological research stations around the country, and hopefully that could lead to conservation in other parts of South America as well.’

Alongside the natural beauty of Paraguay, it is the day-to-day challenges and the people she works with that Karina really loves. ‘In my job there are a lot of small things that really satisfy me. We have interns who come to study for three months and I love it when they tell me what they’ve done, what they’ve learned and what they’ve gained from the experience that I have facilitated for them. That makes me really proud,’ explains Karina.

The internship programme at Para La Tierra is for life sciences students and graduates from around the world, who design and carry out their own projects in Paraguay, guided by Para La Tierra staff. Roughly 80 interns each year work on the Reserva Natural Laguna Blanca, and students from Glasgow are encouraged to apply.

‘The advice that I’d give to young 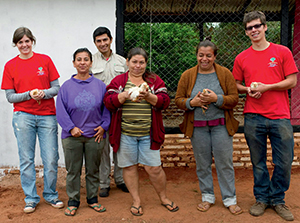 students who are interested in changing the world is to keep working at whatever they are interested in,’ says Karina. ‘Just keep doing the things that you love. And also to think big. If I can do it then anyone can.’

Speaking about the Young Alumnus of the Year Award, Karina is both delighted and typically modest. ‘When I found out that I’d won the award, I was very surprised and also humbled to be a part of it,’ she says. ‘There are lots of people around the world doing fantastic and important work and I’m really lucky to be part of that network. My time at Glasgow gave me the self-confidence to do the things I wanted to do; it inspired me to follow my dreams.’

Find out more about Karina’s work at Para La Tierra.