Heading for the stars

Alumnus David Mackay has always wanted to be an astronaut. One day soon he’ll make his own and other people’s dreams come true when he flies them into space.

Space travel is soon to enter a new phase. The first of Virgin Galactic’s flights into space will be a landmark in aeronautical history and will change our relationship with space, and flight, for good. Glasgow alumnus and chief pilot for Virgin Galactic, David Mackay, is set to be one of the first captains to fly commercial passengers into space.

David’s interest in flight grew from watching the low-flying aircraft near his family home as a child. ‘I have been interested in flying for as long as I can remember,’ he says. ‘When I was six years old we used to see fast jet aircraft from Lossiemouth flying over our village. It looked incredibly exciting to me.’ The manned space programme inspired a generation of would-be space travellers, and watching the moon landing made the young David even more determined to fulfil his dreams.

‘I was so inspired by the Apollo moon programme that from a young age my very ambitious career plan was to become an astronaut,’ he says. After a fascinating career that has taken him through the Air Force and commercial flight, not to mention numerous countries across the world, his dream is now close to becoming a reality.

During his time at school David became increasingly interested in how aircraft fly, so he started looking into degree programmes. ‘I wanted to go to university to do something relevant and interesting. Glasgow offered a degree in Aeronautical Engineering that attracted me greatly and it became the obvious choice.’ 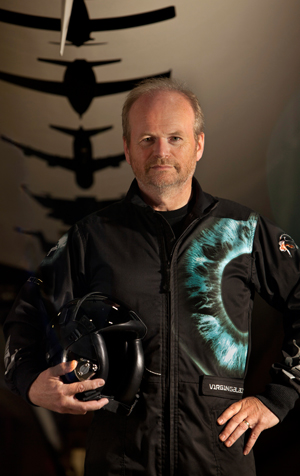 ‌It was during his time at the University that David learned to fly. Having joined the University Air Squadron, he was able to train at Glasgow Airport as part of an incentive by the Armed Forces to attract people into the RAF. ‘I left university with a degree in Aeronautical Engineering and a significant number of flying hours,’ he says. ‘I’d had some close contact with the RAF and there was no doubt in my mind about what I wanted to do with my life.’

David joined the RAF and applied to become a test pilot, training in France as an exchange student from the UK. ‘The way forward seemed to be to become a military test pilot, and then an astronaut. That was what happened to many of those early astronauts in the Apollo programme,’ he explains. But the journey to space was not going to be straightforward, because by that stage there was no manned space programme in the UK. ‘I resigned myself to not achieving that ambition and in 1995 I left the Air Force and joined Virgin Atlantic to be a Captain on the Boeing 747.’

But in 2003 he once again stepped closer to his childhood ambition via work with the aerospace company Scaled Composites. Sponsored by Virgin Atlantic, Scaled Composites built the aircraft in which Steve Fossett flew solo non-stop around the world.

‘I was invited out to Mojave to look at the aircraft and to talk to the engineers,’ explains David. ‘At that time they were also building a prototype spaceship.’ David realised that this might be the key to launching a private commercial space flight. In 2005 Virgin Galactic began working on a commercial spaceship and wanted a test pilot. ‘I was asked to join the company and in 2011 I moved to California to work on the project full-time.’ 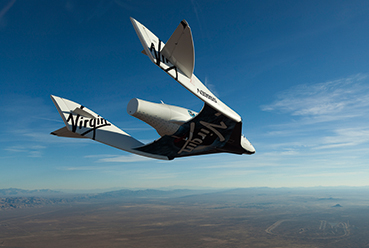 The programme is currently in the test and development stages, and David hopes to launch the first commercial space flight within a year. ‘I know that my first flight into space will give me a huge feeling of fulfilment personally, but there are many people around the world who also dream of going into space and are not in the position to fly the spaceship itself,’ he says. ‘It would be great to help those people fulfil their own dreams as well.

‘Sometimes I do pause and wonder how on earth all this happened,’ he laughs. ‘There is a lot of luck in life but I think you can influence your luck by working hard and getting the right qualifications so you can take advantage of any opportunities that come along.

‘Looking back on the history of aviation, it is only a hundred years ago that man started to fly. Where we have come since then is just astonishing,’ says David. And so, after a fascinating and varied career, he might finally make it beyond the earth’s atmosphere as one of the first pilots to fly commercial passengers into space.