Join us for a live panel discussion episode of the Sci-Curious podcast, featuring LGBT scientists from universities in Glasgow, and voices from the local LGBT community. Burning questions about LGBT, STEM or LGBTSTEM? Bring those too! Sponsored by the Institute of Physics in Scotland.

Dr. Emily Nordmann
Emily is a teaching-focused lecturer and also conducts pedagogical research, in particular she is interested in how students can use lecture capture effectively and how it relates to learning more generally.

Prof. Martin Hendry
He is a passionate enthusiast for public engagement in science and (until Oct 2012) was a Science in Society Fellow for the Science and Technology Facilities Council, leading an international programme of outreach with schools and the public entitled "Exploring the Dark Side of the Universe". He's also the head of the school of physics and astronomy at the University of Glasgow, and is an ally, facilitating an open environment for LGBT researchers to be whoever they want!

Lawrence Chaney
Lawrence is a drag staple in Glasgow’s thriving scene. A regular at Mother Tucker at the Polo Lounge on Tuesday nights, and featured on BBC Scotland’s “Mother Tuckers: Drag Queens of Glasgow. Lawrence is uniquely visible at work, and whilst not a scientist, has unique insight on the subject. 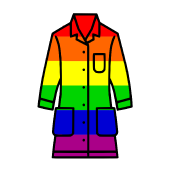