A wireless distributed but local consensus model
A WDLC model has the potential to achieve ultra-reliable joint decisions in autonomous driving despite operating in an LRLLC environment. Under such a scheme, vehicles can make collective decisions on traffic events with relaxed communication links or node reliability.

Perception-Initiative-Consensus-Action (PICA) scheme
Unlike in centralized systems, where information is sent to a central node for decision-making, the novel PICA scheme enables a node to make an initial decision based on its own data obtained sensors such as LiDAR, RADAR, and cameras.

For example, if a vehicle (V0) decides to join the right-hand lane from the left, feedback is received from the WDLC network, dynamically formed by proximal vehicles (V1…x). This allows for maximum safety and reliability. When making the decision, the vehicle believes it is safe, but other vehicles nearby may not agree and can provide feedback from the WDLC network.

Increasing reliability, reducing end-to-end latency
With this new procedure, the common issues associated with centralized systems can be resolved. The distributed architecture allows the decision makers to sit as close to the end user as possible, hence reducing the overall end-to-end latency.

During this synchronization phase, all non-faulty nodes receive sync messages to verify that they have both prepare and commit certificates with the same data and decision, sequence number, and request as the synchronization message.

As the system grows, the latency increases due to the prolonged timeout settings required to maintain the coverage in every phase of communication. To enable time-sensitive tasks, such as real-time decision-making, WDLC will select a smaller network, or more urgent tasks can be processed with higher priority.

This WDLC approach addresses the shortcomings of commonly used centralized systems in autonomous driving, especially where the communication network has lower reliability or even in the presence of local decision error.

By decentralizing autonomous systems, vehicles will be able to steer, accelerate, brake and monitor road conditions like traffic jams through real-time information sharing.

Essentially, a WDLC approach would pave the way for Level 5 automation, where drivers are passengers and able to relax without having to pay any attention to the car’s functions whatsoever.

Scaling autonomous driving systems
As the use of AI in autonomous vehicles evolves, a distributed consensus model will enable vehicles to respond to real-world data points and process large volumes of data quickly.

As the number of the autonomous vehicles expands, this distributed approach can be scaled at a low cost as it won’t be bottlenecked by wireless network capacity and the need for ever greater computing power.

Improving telematics systems
With the ability to power ultra-reliable and real-time communications, a WDLC can also play a major role in advancing telematics systems. In autonomous driving, telematics is used to provide insights into a vehicle’s speed, real-time location, mileage, and fuel usage to standardize information in a reliable manner.

When autonomous vehicles become mainstream, this data will need to be provided instantaneously and require an ultra-reliable system to process the information.

Telematics that uses a WDLC will enable vehicles to share essential information and send distress signals to emergency response teams in the event of an accident.

The Glasgow team has demonstrated the new concept of WDLC in terms of algorithms, protocols software, and hardware platforms with wireless channels and how WDLC can enhance critical decision-making in a trustless environment.

The IP & Commercialisation Team at the University of Glasgow invites enquiries from parties interested in exploring collaborative opportunities for exploiting and further developing this technology and IP. Our aim is to make this technology readily available to autonomous vehicle manufacturers across the globe.

For more information on this technology, contact Darian Brookes 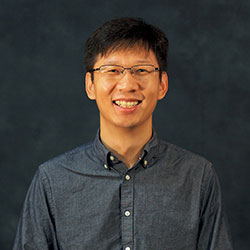 Dr Lei Zhang is a Senior Lecturer at the University of Glasgow. He received his PhD degree from the University of Sheffield. He was a research fellow in the 5G Innovation Centre (5GIC), University of Surrey. Dr Zhang has academia and industry combined research experience on 3G/4G/5G wireless communications and networks, and distributed systems for IoT, blockchain, autonomous systems. He is/was PI or Co-I of 10+ research projects funded by the UK Engineering and Physical Sciences Research Council (EPSRC), Department for Digital, Culture, Media & Sport (DCMS), Scottish government and industry. His 20 patents (including 17 international PCT patents) are granted/filed in over 30 countries.