Through Wellcome funding of ISSF 1 and ISSF 2 Glasgow Polyomics has catalysed the wide spread use of all of the Omics based research strands into biomedical and biological sciences across the University of Glasgow. Advances in our ability to collect huge datasets relating to all of the fundamental biochemical components of life is revolutionising how the biomedical sciences impact on all that we do. We hope that ISSF 3 can build on this success.

Below are a few examples of where the combined impact of Glasgow Polyomics and Wellcome ISSF has been made.

Myotonic dystrophy type 1 (DM1), one of the most variable single gene disorders, is caused by the expansion of a genetically unstable CTG repeat. The number of CTGs is normally less than 40, but DM1 patients may inherit from 50 to over 1,000 repeats. The expanded CTG is highly unstable in both the germline and soma in a process that is age-dependent, tissue-specific and expansion-biased. Complexity is further increased by the presence of variant non-CTG repeats, such as CCG, in a subset of patients.

Prof Monckton highlights that "Traditional approaches to genotyping and quantifying somatic mosaicism are slow, labour intensive and often do not reveal the true nature of the mutation in individuals. Using the ISSF award and working in collaboration with the Glasgow Polyomics Facility, the West of Scotland Molecular Genetics Service and the Medical College of Wisconsin, we were able to develop new methods for genotyping the DM1 mutation by massively parallel sequencing using several of the currently available next-generation sequencing platforms. We have developed robust methods for sequencing both small non-disease associated alleles and large expanded disease causing alleles in their entirety. This work has greatly facilitated our research into the molecular genetics of symptomatic variation in DM1 revealing an unexpectedly high degree of mutational variability both between and within DM1 families, both in the repeat itself and the immediate flanking DNA. This work has led directly to the award of two additional project grants in DM1 and the award of a major research contract addressing similar issues in Huntington's disease." 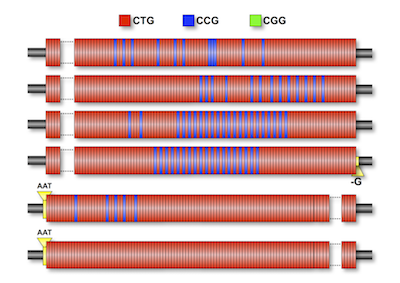 Dr Christopher Loughrey and colleagues from both the Institute of Cardiovascular and Medical Sciences (CAMS) and the Institute of Infection, Immunity and Inflammation (III) received a ISSF Catalyst Grant during the 2011-2012 funding period. Using an interdisciplinary approach, the team set out to investigate a common role for cathepsins in the cardiac pathogenesis of two diverse diseases; Coronary Heart Disease and Human African Trypanosomiasis.

Coronary Heart Disease (CHD) is the leading cause of death in the UK and worldwide. Occlusion of coronary arteries in patients with CHD can lead to heart muscle cell death (myocardial infarction; MI) and the development of heart failure (HF). Clinical reperfusion of the coronary arteries is important in limiting the extent of MI but paradoxically may lead to ischaemia/reperfusion (I/R) injury. There is overwhelming evidence that elevated levels of a protease called cathepsin-L occur in the heart and serum of patients with CHD. During I/R injury, our animal model data has demonstrated that the heart is an important source of cathepsin-L and that use of a cathepsin-L inhibitor limits I/R injury. 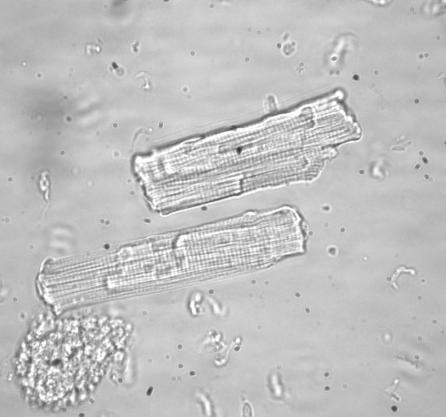 Initiating An Interdisciplinary Network For Research

Dr Loughrey explains that "We had therefore identified cathepsin-L as a novel therapeutic target with translational potential common to two diverse diseases with unmet clinical need. Using the ISSF Catalyst award we were able to initiate a new interdisciplinary collaboration including clinicians, physiologists, parasitologists, and bioinformaticians within the Glasgow Polyomics facility to: (1) determine cardiac I/R pathways altered by the cathepsin inhibitor, (ii) perform the first measurements of cathepsin-L levels in patients during I/R injury and (iii) advance existing working collaborations with parasitologists to enable determination of the mechanism by which parasite-derived cathepsin-L leads to cardiac dysfunction."

Dr Fiona Achcar from the Institute of Infection, Immunity and Inflammation (III) received a ISSF Fellowship Grant during the 2013-2014 funding period. Fiona sought to use mathematical modelling techniques to model the metabolic interactions between the host and parasites during didease.

Dr Achcar says "I was delighted to receive an ISSF fellowship in the University of Glasgow, giving me an opportunity to forge my own pathway in science. I have been interested in the application of computational methods to Biology for many years and the intricate complexities of metabolism. The ISSF fellowship enabled me to start generating models of metabolism of the parasite Leishmania, responsible for many thousands of deaths each year. The parasites reside within macrophages in humans, and this requires a degree of metabolic liaison between two cells." 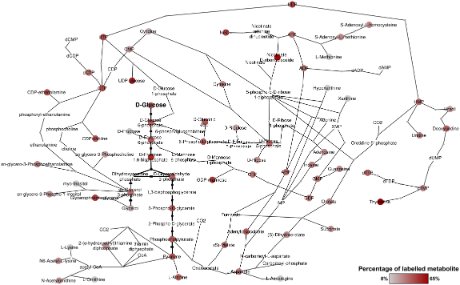 From ISSF Grant To Funded Fellowship

"My relationship to Glasgow Polyomics also enabled the collection of rich metabolomic datasets to help build models. The nine month ISSF fellowship was integral in enabling me to go on and secure a Leverhulme Trust fellowship which will give me an opportunity to continue the mathematical modelling of metabolism and learning about the infection process."

Dr Lilach Sheiner from the Institute of Infection, Immunity and Inflammation (III) received two ISSF Fellowship Grant during the 2011-2012 and 2013-2014 funding periods. 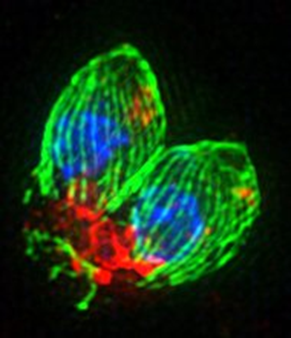 Dr Jesse Dawson and colleagues from both the Institute of Cardiovascular and Medical Sciences (CAMS) and Glasgow Polyomics were awarded an ISSF Catalyst Grant in 2011-2012 for the project "The Biomarkers in Stroke Programme; Detecting, Understanding, and Predicting Outcome After Stroke".

The aim was to identify biomarkers that facilitate management of patients with suspected stroke and transient ischaemic attack (TIA) and enhance our understanding of stroke pathophysiology and to distinguish stroke and TIAs from other diagnoses. This can be difficult during first clinical assessment. Further, brain scans such as MRI don't always give the answer and are contra-indicated in some patients. There is a need for novel biomarkers to facilitate diagnosis in patients with minor stroke, to aid in the identification of stroke subtype, and to predict outcome after stroke. A diagnosis of stroke and TIA need specific treatment and has an important impact on patients so accurate diagnosis is crucial.

‌In the catalyst study, using relatively small numbers of stroke and TIA patient versus health controls, little of significance was identified in blood. However, clear differences were noted in urine. Among these were metabolites of masses consistent with members of the kynurenine pathway which has previously been implicated as a key marker for stroke and also several fatty acids and acyl carnitines. Of huge significance, however, was the identification of a metabolite that was found almost exclusively in patients but not controls. The metabolite has been labelled as metabolite X since its mass is not consistent with any metabolite in the human metabolome database. 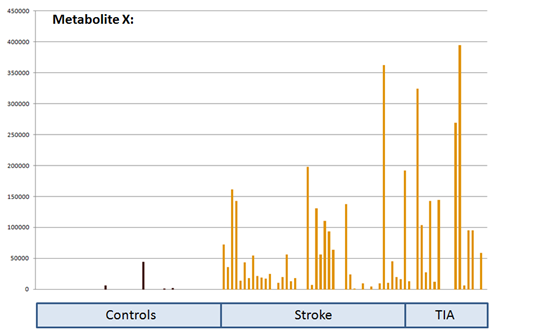 The Importance of this Study is Manifold

To take the findings of this pilot data further Dr Dawson and Prof Barrett were awarded a MRC Confidence in Concept (CiC) grant. The follow up work confirmed elevation of Metabolite X levels in cases of stroke. A further application for funding for a diagnostic accuracy study is now review.