Led by the University of Glasgow and published in Nature Structural Biology, the research is based on data and models collected from the Scottish Centre for Macromolecular Imaging (SCMI) and was conducted with colleagues at the University of Dundee. 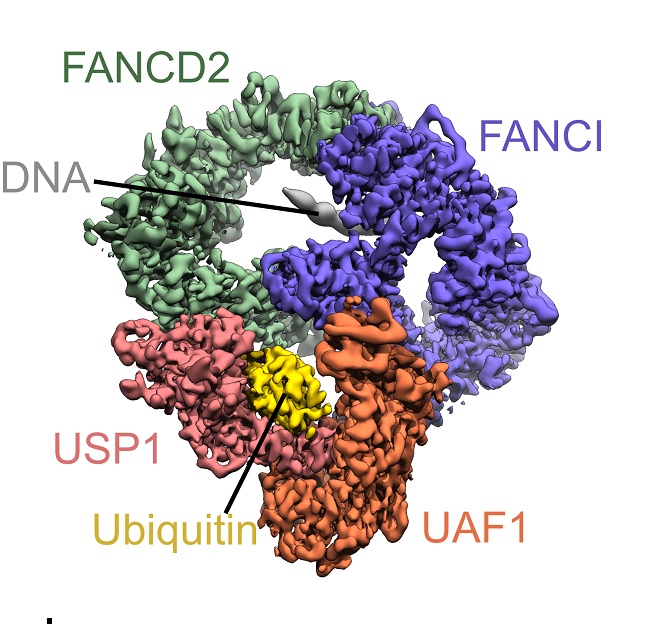 The study looks at a toxic type of DNA damage called inter-strand crosslinks, which is normally repaired through a process initiated by a single molecule of ubiquitin – a protein commonly found in humans, animals and plants – being attached to each of the affected strands of DNA. In order to complete the DNA repair process the ubiquitin molecule must also be successfully removed from the damaged site – a process known as deubiquitination.

Now, for the first time, researchers are able to show at a molecular level, the exact snapshot in time when the ubiquitin molecule is about to be removed by the targeting enzyme USP1 (Ubiquitin carboxyl-terminal hydrolase). To do this scientists used the cutting-edge electron microscope at the SCMI, and with the data are now able to understand how this complex process occurs.

Understanding how USP1 interacts with ubiquitin during the removal process is considered to be scientifically important and opens the door to further research.in the area that could have impacts on cancer and other diseases. In cancer cells, efficient functioning of USP1 can help repair any damage caused by drug therapies, thereby making treatment of the disease less successful. As a result, USP1 has been identified as a potential drug target for overcoming cancer resistance to treatment.

Professor Helen Walden, lead author of the study and professor of structural biology at the University of Glasgow, said: “The developments in cryo-EM over recent years have revolutionised structural biology, and we are really excited to capture this important complex, and how this will allow us to understand the DNA repair on a deep molecular level.”

The SCMI is a structural biology centre, home to a cutting-edge electron microscope – the first of its kind in Scotland – which will be used to image biological molecules at the atomic level.

The technology is being used to support vital research into diseases posing the greatest threat to human and animal health, providing greater capabilities in areas such as vaccine development, cancer research, and drug design and discovery.