Climate change damage to the homes of clownfish affects their physiology

The metabolism of clownfish – or anemonefish – decreases when their sea ‘homes’ are damaged by climate change, according to a new study.

The research – led by an international team of scientists from the University of Glasgow and CRIOBE, and published today in Functional Ecology – found that exposure to bleached coral reefs can have a negative effect on the physiology and growth of anemonefish. 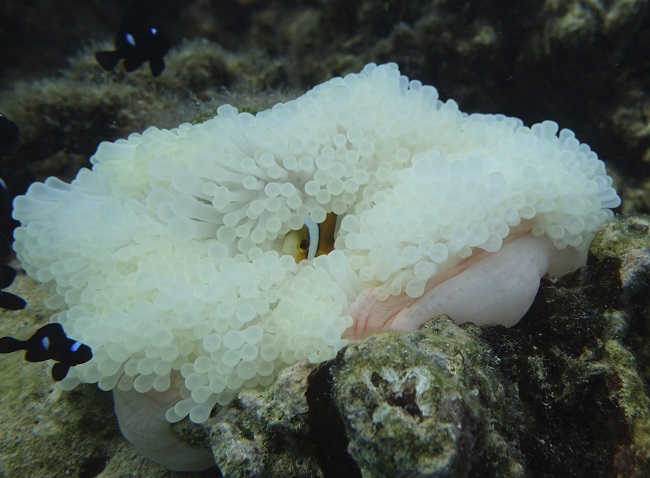 The study found that anemonefish living in bleached anemones for longer than a month progressively decreased their metabolism, had less growth and modified their behavior to become less active.

Mass coral bleaching is the result of extreme heat waves caused by worldwide climate change. On tropical reefs, anemones are home to anemonefishes. When anemones bleach, they don’t just lose their color, but also the algae that live in their tissues that provide energy to anemones and also anemonefishes.

The impacts of temperature-induced bleaching events on corals and anemones are well known but, until now, the longer term impacts on anemonefish has been understudied. The team of scientists from France, Chile, Denmark and the UK conducted the research at CRIOBE, a research station in French Polynesia.

For the study, the international team exposed 47 wild juvenile anemonefish to thermally-induced bleached anemones, as well as healthy anemones, for several months in Moorea lagoon. The team measured fish behavior, metabolism and growth after one month of living within healthy or bleached white homes. Each measure was repeated a month later, after two months of exposure; and, finally, juvenile anemonefish survival was monitored over nine months.

Dr Shaun Killen, from the University of Glasgow’s Institute of Biodiversity, Animal Health and Comparative Medicine, said: “So far scientists have mainly focused their attention on the direct effects of bleaching on corals and on the effects of bleaching-induced coral mortality on the coral reef community. However, our results suggest that even if corals survive and recover from a bleaching event, this doesn’t occur without costs for their associated communities that structure coral reef ecosystems.

“Overall, our findings highlight the gravity of bleaching events and emphasise the need to regulate human actions that contribute to climate-change related events, such as bleaching”.

Suzanne Mills, Associate Professor at École Pratique des Hautes Études (EPHE) PSL Université Paris, CRIOBE, France, said: “Although fish in bleached anemones spent more time out of their anemone, they were less active and moved around the anemone less, suggesting an inability to adjust their feeding rate to cope with the lower amount of food available.

“Our finding that bleached anemone hosts lower the growth of associated fish is therefore likely to have cascading and life-long consequences for individual anemonefish, but also for other fish species associated with hosts that bleach.”

Daphne Cortese, PhD student with EPHE, CRIOBE and the University of Glasgow, said: “In food-limited environments, it can be advantageous to down-regulate metabolism, but there is a limit to how much it can be decreased, and we didn’t obverse any stabilization over time.

“This finding, together with lower growth and modified behavior, suggests that fish in bleached anemones are at an energetic disadvantage and that there is an increasingly negative impact of anemone bleaching on anemonefish over time rather than an acclimation to the new condition.”

The study, ‘Physiological and behavioural effects of anemone bleaching on symbiont anemonefish in the wild,’ is published in Functional Ecology. The study is funded by