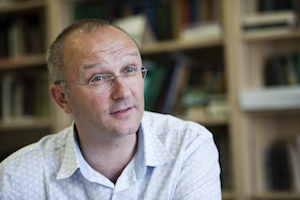 Roibeard O Maolalaigh was elected as Vice-Principal of the University and Head of the College of Arts in 2014 and stepped into the post on 1st January 2015.‌

Professor O Maolalaigh became Head of the School of Humanities in October 2012 and has been Professor of Gaelic at the University since 2005. In April 2010 he was appointed to the newly established Chair of Gaelic, the first Chair of Gaelic post at a University in Scotland.

Professor O Maolalaigh was previously Assistant Professor at the School of Celtic Studies, Dublin Institute for Advanced Studies, and a lecturer at the University of Edinburgh. He is Director of the British Academy-funded Digital Archive of Scottish Gaelic project, which seeks to establish an online archive which will form the basis of future corpus and technological developments of the Gaelic language.

Find out more about Industry Day 2015.