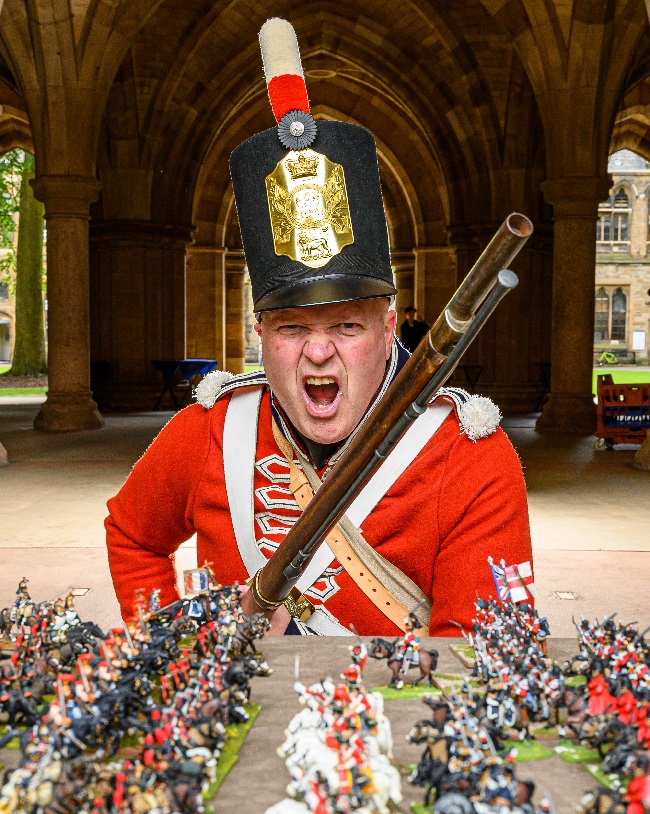 The University of Glasgow plays host this weekend to the biggest ever historical table top war game to replay the Battle of Waterloo.

An international team of 120 players are fielding over 20,000 miniature soldiers for a spectacular re-match of the famous battle – which marked the final defeat of Napoleon Bonaparte by allied forces led by the Duke of Wellington.

The 20,000 plus 28mm figures, representing every battalion, regiment and battery which took place in the real Battle of Waterloo, were painted over the last year by wargaming enthusiasts, veterans’ groups, students, and members of the public.

The event, which will be fought over two days in the Kelvin Gallery of the University of Glasgow, is in aid of Waterloo Uncovered, the charity for military veterans, which has been investigating the archaeology of the Waterloo battlefield since 2015. 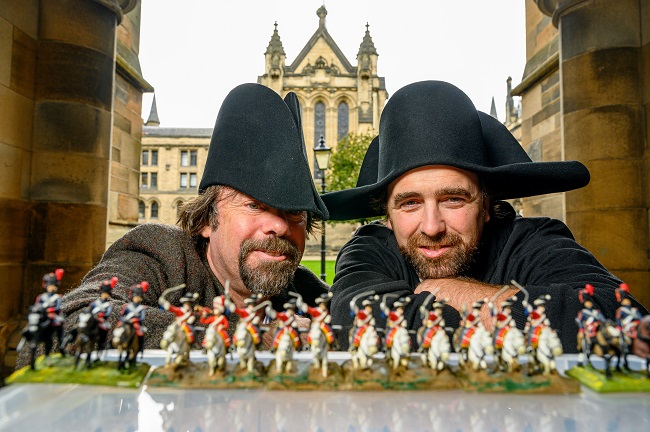 The charity uses a team of professional archaeologists including Professor Tony Pollard from the University of Glasgow alongside veterans and serving military personnel, many of whom suffer from a range of physical and mental injuries because of their service, including Post Traumatic Stress Disorder (PTSD).

Professor Pollard, the University’s Professor of Conflict History and Archaeology said: “This has been a massive undertaking, but we have received support from people around the world to make this happen. The Battle of Waterloo is one of those iconic and epic battles involving two of the most famous historical figures – Napoleon Bonaparte and the Duke of Wellington – and given my long involvement with the battlefield as an archaeologist there was never any doubt about which battle would feature in this event.

“We know that British-led allied forces beat Napoleon Bonaparte, but there is a possibility that we will see the game re-writing history, and it will be interesting to ponder what Britain would be like today if Napoleon had won on that fateful day.

“The story of Waterloo has been immortalised in song, books and films, but this project is pretty unique, and will help to bring history to life, out of the classroom so to speak, and to a wider audience. We look forward to welcoming wargamers and spectators from all over the world to Glasgow this weekend.”

Professor Pollard added: “I am especially pleased that this event will not merely be a game played by war gamers, but it will also involve Serving Personnel and Veterans who will be attached to experienced war gamers for the re-match, which is entirely in-line with Waterloo Uncovered’s policy of veteran engagement.”

Mark Evans of Waterloo Uncovered said: “Many of our veterans have experienced battle at first hand; getting them involved in both the dig and in the Great Game we believe lends a whole new dimension to the event.
“We are delighted to be involved in such a fantastic event.”

Professor Sir Anton Muscatelli, Principal and Vice-Chancellor of the University of Glasgow said: “This is an ambitious undertaking, but I believe it is wonderful way to engage and learn more about this key part of our history.

“The University of Glasgow is delighted to support this charity event and I am looking forward to trying my hand at war gaming as part of the Great Game event. We look forward to welcoming everyone to Glasgow for this weekend of events.” 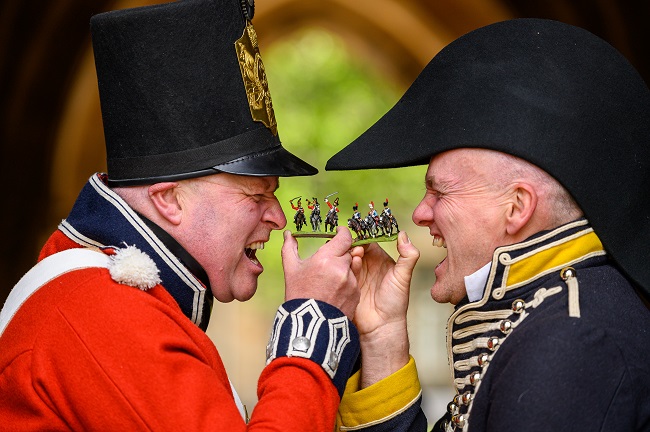 For more information please contact Aine Allardyce in the University of Glasgow Communications and Public Affairs Office on 0141 330 3535 or email aine.allardyce@glasgow.ac.uk

The Battle of Waterloo

The Battle of Waterloo took place on June 18th 1815. The Duke of Wellington commanded an Allied army of British soldiers (many from Scottish regiments) and troops from the Netherlands, Belgium and Germany. His forces were positioned on a ridge blocking Napoleon's route to Brussels and withstood a series of bloody attacks all day. Finally the arrival of a second Allied army of Prussians tipped the balance, and the battle ended in a crushing defeat for the French. The battle resulted in tens of thousands of casualties on both sides and ended for ever Napoleon's ambitions for European domination: he died in exile on the Island of St Helena in 1821. Many features of the original battlefield, including the restored Chateau of Hougoumont, have been preserved and have been the focus of excavation by Waterloo Uncovered since 2015.

Waterloo Uncovered, is an archaeology project involving military veterans and serving personnel who have been injured or are suffering from PTSD. Working in partnership with some of Europe’s top universities including the University of Glasgow, and through the unique perspective of a team comprised of archaeologists, veterans, and serving soldiers, Waterloo Uncovered aims to understand war and its impact on people - and to educate the public about it. The patron of the charity is the current Duke of Wellington - Charles Wellesley, 9th Duke of Wellington.

The Great Game: Waterloo Replayed charity event is being held in the University of Glasgow on the weekend of 15 and 16 June and will see 120 players from around the world replaying one of the most epic and decisive battles in history. You can follow the progress of the event on Twitter @WaterlooReplayed or via the University of Glasgow’s Instagram Account.

The Great Game will play from 09.30 to 16.30 on both Saturday 15 June and Sunday 16 June. Tickets available to view the game, as well as participate in eight other introductory short skirmish wargames are £6 for two hours. Available from Eventbrite.