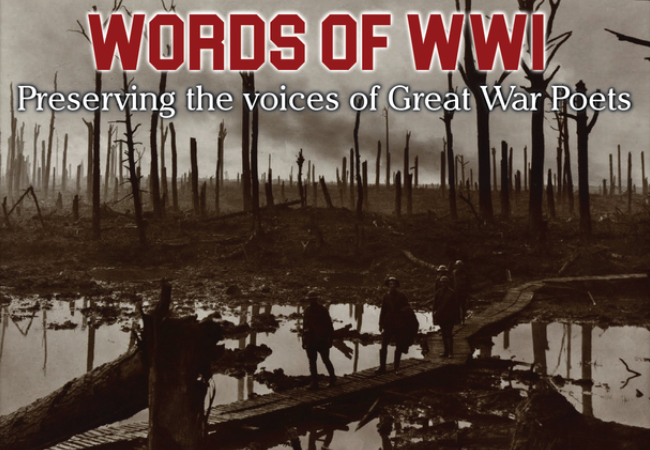 A group of University of Glasgow students have launched a World War One project to remember the fallen in poetry and film.

The students intend to recite and film a selection of poems by Great War poets while walking through the former battlefields of the Western Front.

Words of WW1 is a project run by students studying across the University including many from schools within the College of Arts – from English Literature and Archaeology to Film & TV, Physics and Computing Science.

Xavier Weiss, a 2nd year Physics and Computing Science student is the Project Manager of Words of WW1, said: “We come from many disciplines studying at the University of Glasgow. But we are united by a common passion for history, poetry and film-making.

“We will be reciting the words of poets, who experienced first-hand the horrors of the Great War, in the place where they were written.

“When the bell tolled on 11th November, 1918 – some 17 million people had died. But every single one of that number was a person who had dreams and hopes and lives as rich as our own today.

“If we have been alive then many of us would have been the same age as those who went off to fight. We are hoping that this project will allow us to commemorate, empathise and identify with the men of the First World War, 100 years on.”

“These soldiers of the First World War were from a generation whose lives were disrupted and too often either destroyed or lost in a senseless conflict. History has a tendency to gloss over these details.

“That is why the Words of WW1 team has decided to help preserve the voices of Great War poets. We want to try in our own way to capture the experience of First World War soldiers through their most potent means of expression – their poetry. Those involved in this project feel a moral duty and passion to amplify the seemingly faint and distant voices of the generations that passed.”

JuEunhae Knox, a PhD student studying poetry, is the Poetry Team coordinator of Words of WW1, said: “I was eager to join the WWI Project as a way to remember and learn from momentous events in history through the powerful platform of spoken poetry."

Sasha Hnatiuk, a final year MSc Museum Studies student and the poetry team’s translator said: “Through this project, we are creating a living museum that illustrates the power of language and it's ability to cross geographical and cultural boundaries."

Words of WW1 will be released online in August 2018 as a series of 2-3 minute videos. All the poems from both sides of the conflict will be recited in English, with some translated first from their original language, and will come with subtitles in French and German.

The series also follows an overarching, chronological theme where the poems transition from initial enthusiasm and patriotism to a descent into the horrors and moral confrontations the war provoked. Each one is not filmed statically but dynamically - with strong cinematography, increasingly abstract elements and expressive acting accentuating the psychological and metaphorical texture of each poem.

The project took the decision to use poems from both sides in the First World War to demonstrate how similar the experiences were, no matter the nation or background of the soldier.

View a video by the Words of WW1 team here: