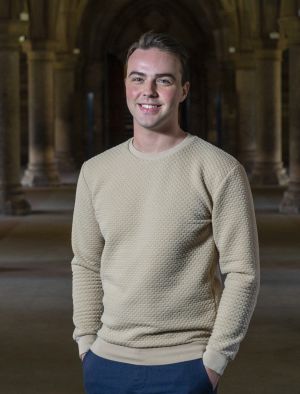 Find out about the TIE Campaign

Take next steps with Ali:

Find out more about Ali's work to make giving easy

The student activist who made LGBT history

Jordan Daly co-founded the campaign group and charity Time for Inclusive Education (TIE). TIE has one aim: to tackle homophobia, biphobia, and transphobia with LGBT-inclusive education in schools. Jordan’s experience growing up as a young gay man, and his feeling of isolation at his most desperate helped to shape the work that TIE do in schools.

In this episode Jordan tells the incredible story of TIE and how he took the organisation from grass roots campaigning to making LGBT history, it all started with one petition.

Hear how Jordan balanced his second-year UofG studies, alongside working part time and launching the campaign. Hear how he learnt to navigate the Scottish Parliament, to meet MSPs and persuade them to support the TIE campaign.

Jordan shares how he looks after himself in the face of social media criticism and attacks from anonymous accounts.

You’ll get insights from TIE’s innovative digital campaigns, including how they used social media as an integral campaign tool to gain traction amongst politicians, young people and teachers. Jordan even offers up the TIE press release template!

What's your soundtrack: With Ali Noble UofG History student who's making it easier for students to give to charity

Find out about the TIE Campaign

Take next steps with Ali:

Find out more about Ali's work to make giving easy

Listen The Inside Track on Impostor Syndrome