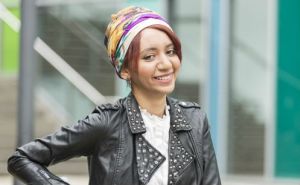 Read about Amal’s journey in Avenue, the UofG alumni magazine

The Glasgow Girl putting refugee rights on the global stage

Amal Azzudin is a Human Rights campaigner and Social Justice Activist working for the Mental Health Foundation and as an ambassador for the Scottish Refugee Council. Amal's passion for human rights and social justice began when she rose to fame as one of the Glasgow Girls in 2005 after campaigning against dawn raids, and the detention and deportation of asylum seekers in Glasgow.

In 2016 Amal was Named one of the Young Women’s Movement Outstanding Women in Scotland and won the saltire society’s young outstanding women of Scotland. Amal was awarded The University of Glasgow World Changing award in 2018 for her major contributions to bettering human right regulations for refugees.

In this episode, listen out for Amal's Mum making a milestone phonecall, an interesting way to pay for the bus and what happened to Kez's sleeve on the way to the interview.

Read about Amal’s journey in Avenue, the UofG alumni magazine

Listen to Jordan Daly - The student activist who made LGBT history

Listen to The Inside Track on Impostor Syndrome